430,000 homes in Chiba still without power after typhoon 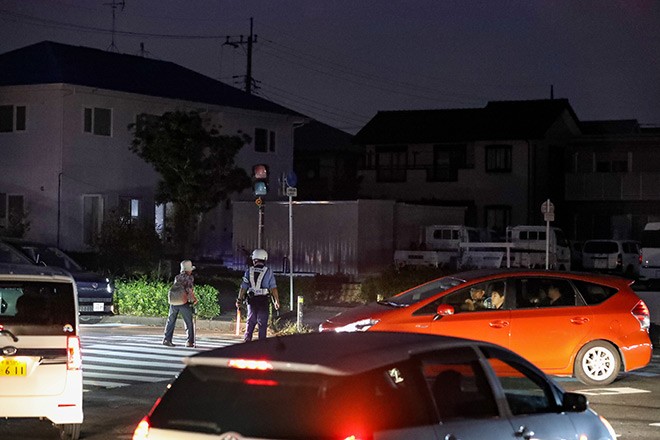 Police officers guide pedestrians on a crossing walk with hand signals in Chiba’s Midori Ward as power failure continued on the evening of Sept. 10. (Naoko Kawamura)

CHIBA--Hundreds of thousands of homes in Chiba Prefecture are still without power following the passage of powerful Typhoon No. 15 on Sept. 9, and the outlook for a quick restoration of services is pretty dim.

On Sept. 10, a 93-year-old woman in Minami-Boso and a 65-year-old man in Ichihara died of apparent heatstroke as temperatures rose to around 35 degrees after the typhoon.

Both areas had suffered power blackouts, meaning air conditioners were apparently not working.

Suzuki Hospital in Kimitsu opted to transport 99 inpatients to other facilities due to fears of heatstroke after electricity was cut off.

Kimitsu Chuo Hospital in Kisarazu accepted the patients on Sept. 10 but then had to arrange for other hospitals in and outside Chiba Prefecture to take 85 patients due to limited capacity.

A power supplier on Sept. 11 ruled out a snappy restoration of power sources in Chiba Prefecture.

Sadanori Kaneko, president of TEPCO Power Grid Inc., an offshoot of Tokyo Electric Power Co., said at a news conference in the capital on the morning of Sept. 11 that it would be impossible to restore power to all affected households in the prefecture by the end of the day.

The company the previous evening floated the prospect that the number of homes without power would be reduced to about 120,000 from 540,000 or so by the morning of Sept. 11 and that power would be restored to all households by the end of the day.

TEPCO Power Grid blamed the delay on a fierce thunderstorm that lit of the night sky on Sept. 10 and new glitches discovered in the power grid.

It now appears likely that more districts in the prefecture will also have to deal with being unable to use phones and other communication devices due to the stalled work to restore power.

Backup power, such as batteries, that supplied electricity to communication base stations after the power outage run out in some districts from Sept. 9.

About 80,000 land-line telephones and 70,000 Internet connections remain disconnected in the prefecture, according to Nippon Telegraph and Telephone East Corp.

The communication networks of mobile carriers NTT Docomo Inc., KDDI Corp. and Softbank Corp. are in disarray in some parts of Minami-Boso, Kimitsu and Choshi cities in the prefecture.

Vehicles loaded with power batteries were sent from locations near Tokyo to restore electricity at local government buildings in Chiba Prefecture as a top priority as local officials were expected to lead disaster recovery and rescue efforts.

“This is merely a stopgap measure,” said a KDDI official. “Unless the power supply is restored, full recovery of communications will not be possible.”