Birds make home on volcanic isle transformed by blast in 2013 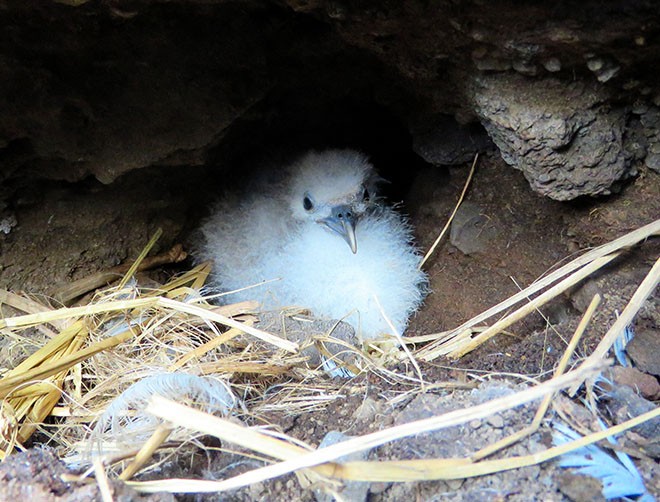 A wedge-tailed shearwater chick has been spotted for the first time on a Pacific island that was ravaged by a volcanic eruption about six years ago.

An Environment Ministry team studying wildlife and other features on Nishinoshima island about 1,000 kilometers south of Tokyo said Sept. 12 that it found nests made by the birds, along with eggs and a chick.

The island is about 130 kilometers west of Chichijima island in the Ogasawara chain.

Ministry officials, biologists, geologists and other scientists visited the island from Sept. 3 to 5.

What’s unusual about the findings is that plants are typically the first to appear in new ecosystems on land.

“It shows how wildlife takes root on an isolated island,” said Kazuto Kawakami, a senior researcher at the Forestry and Forest Products Research Institute who took part in the survey, noting that the study is of global significance.

The 2013 eruption, the first in about 40 years, along with subsequent blasts, spewed lava flows that considerably expanded the island, leaving only a small part of the original land in the west.

Wedge-tailed shearwaters are found on other Ogasawara islands.

The team also found 60 masked booby birds, the largest such colony in Japan, as well as other seabirds and insects along the coast in the newly formed areas in the east.

Dermestid beetles, which are attracted to food uneaten by chicks, were also confirmed.