Japan plans Antarctica test for technology to be used on moon 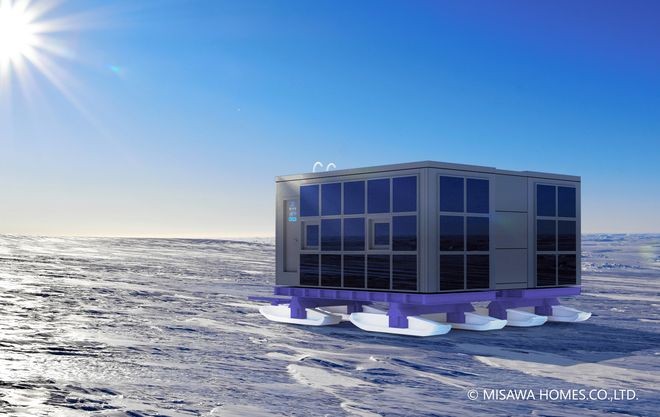 A rendering of movable base units to be set up in Antarctica (Provided by Misawa Homes Co.)

In settling for the next coldest thing to the moon, Japanese researchers will test a movable base in Antarctica next year under bone-chilling temperatures.

The team will seek to determine if the base can endure bitterly cold environments, an experiment aimed at developing technology that can be utilized when a manned base is built on the moon.

The 61st Japanese Antarctic Research Expedition, which will head to Antarctica in November, will conduct the experiment.

The team will set up two 3-meter-high residential units at Japan’s Syowa Station and connect them together in the experiment, which is expected to start in February or later next year. Each unit is 6 meters by 2.5 meters.

The structures are designed to make it easier for expedition members to assemble without the assistance of building specialists. They are also designed to endure the harsh Antarctic environment with gale-force winds and extremely low temperatures.

The units will not house inhabitants year-round, but a habitable environment will be prepared with electricity supplied by solar power.

Sleds can be placed under the floor of the units, so they can be pulled by snow vehicles for transporting. The researchers are considering conducting the experiment after moving the units to the inland of Antarctica, where temperatures dip to nearly minus 80 degrees.