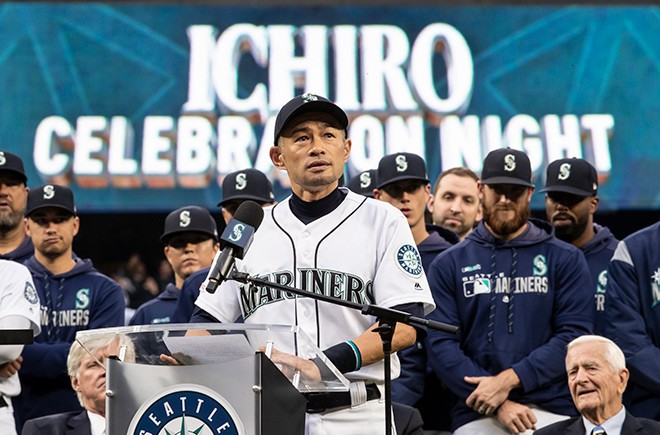 Former Seattle Mariners player Ichiro Suzuki pauses while giving a speech during a ceremony in which he was given Mariners' Franchise Achievement Award on Sept. 14 in Seattle. (AP Photo)

The Seattle Mariners presented team legend Ichiro Suzuki with the first-ever Mariners Franchise Achievement Award, giving him a chance to thank the city's fans for their support.

"This is a happy occasion. When I retired that night in Tokyo, I had an incomplete feeling because the great fans of Seattle could not be there," said Ichiro, who retired during the Mariners' season-opening series in Japan in March. He made his comments in English after using a translator throughout his career.

"Tonight I want to express my appreciation to you for your touching support over the years. When I came to Seattle in 2001, no position player had ever come from Japan before. The one you got was 27 years old, small and skinny.

"And I know, you had every reason not to accept me. However, you welcomed me with open arms and you have never stopped, even when I left and came back. I was so grateful for the chance to return in 2018, and the reason is you fans."

Ichiro, 45, received the award Saturday night at T-Mobile Park, with Hall of Fame members Ken Griffey Jr. and Edgar Martinez among those joining him for the ceremony.

Since his retirement, Ichiro has worked as a front-office adviser, with Mariners players and with minor leaguers at Triple-A Tacoma and Class-A Everett.

"He's been here almost every day we've been home, down in the cage, throwing batting practice, talking to the guys, working with guys, you see him out on the field running around," manager Scott Servais said. "... He loves the game. He loves baseball. I think it's great he's around. He does have a passion for the game and for giving back. And good for him."