Children back at school in Chiba, but power, lunch problems remain 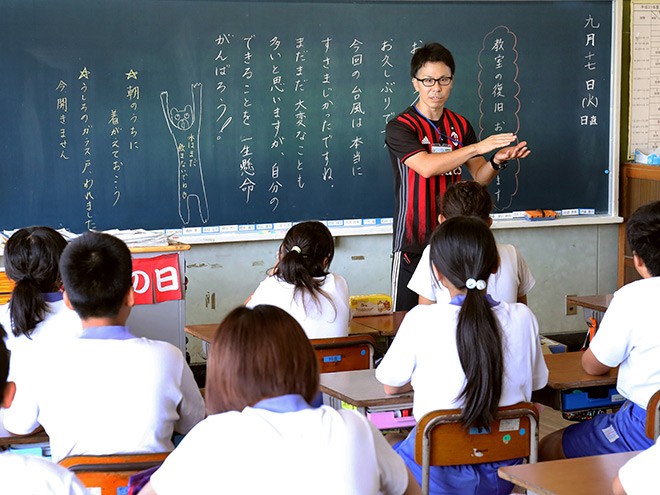 A classroom blackboard bears messages about damage from Typhoon No. 15 at the Municipal Koshin Elementary School in Yachimata, Chiba Prefecture, on Sept. 17. The school reopened that day. (Kazutaka Eguchi)

YACHIMATA, Chiba Prefecture--Classes resumed at all 13 elementary and junior high schools here on Sept. 17 for the first time since Typhoon No. 15 triggered a massive power blackout in the prefecture.

Broken window panes were patched with cardboard in one sixth-grade classroom at Municipal Koshin Elementary School, located in an area where more than 6,000 households remain without electricity.

“There might still be broken glass scattered around, so be careful,” teacher Tomohito Naito, 35, told pupils during the class's morning homeroom session.

Lunch programs at the schools also restarted, though some scheduled menu items had to be changed.

Koshin Elementary teachers stood along a route to the school, welcoming pupils back and inquiring about their well-being.

“Were you OK during the blackout?” one asked. “Be careful about fallen trees,” another told the children.

Naito asked the children how they coped without electricity and water.

“I couldn’t use the bathroom,” one pupil said.

The school’s annual athletic meet is scheduled soon, the last one for the sixth graders.

“Since we couldn’t practice for it in the past week, let's come up with a way to compensate for the delay,” Naito urged them.

Schools reopened on the day in other municipalities as well.

In Minami-Boso, all 12 of the city’s public elementary and junior high schools and six kindergartens resumed classes.

“Let’s cheer each other up and ride it out together!” read a message on a blackboard in a third-grade classroom at the Municipal Reinan Elementary School.

But warnings to kids were also posted such as, “Don’t drink tap water just yet!”

Returning students were served boil-in-the-bag curry for lunch since the center that supplies school meals in Minami-Boso won't reopen until Sept. 18.

No reopening day for the city’s No. 3 Junior High School has been determined yet since windows remain broken and the campus was flooded by rainfall that started on the evening of Sept. 15.

Students in Tateyama are expected to have a longer wait before their school lunch service resumes, because the typhoon damaged the roof of the city’s facility to prepare the meals.

They were asked to bring their own lunches from Sept. 18. Starting from Sept. 27, the city is planning to supply meals that require no cooking.

According to the prefectural board of education and other sources, about 760 public schools in the prefecture, or 60 percent, closed on Sept. 9 when the typhoon made landfall.

With power being restored in more areas, only 15 schools remained closed on Sept. 17.

(This article was written by Masafumi Ueda, Makoto Kawakami and Erika Matsumoto.)