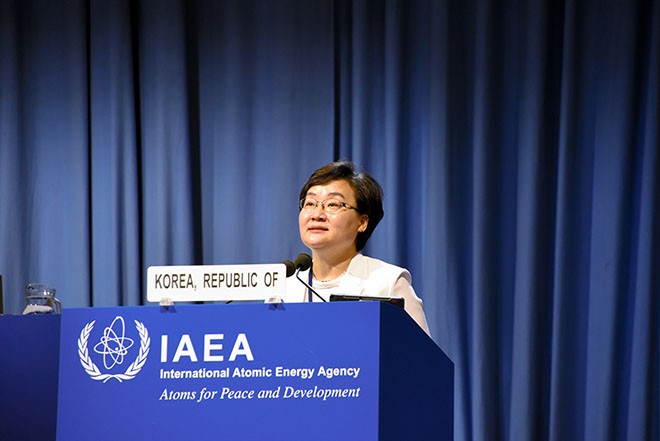 VIENNA--South Korea asked the International Atomic Energy Agency to step in on how to manage radioactive water accumulating at the crippled Fukushima No. 1 nuclear power plant, citing concerns the water may be discharged into the Pacific Ocean.

During the IAEA's General Conference here, South Korea's First Vice Minister of Science and Information and Communication Technology Moon Mi-ok said Sept. 16 that the issue of contaminated water has not been resolved, “escalating fear and anxiety throughout the world.”

She said that if contaminated water is discharged into the ocean, it would no longer be Japan’s domestic problem, “but a grave international issue that can affect the whole global marine environment,” Moon said.

She called on the IAEA to get actively involved in how to deal with the situation and urged Japan to take effective steps to resolve the crisis.

Hikihara said Japan had already accepted on-site inspections by an IAEA team of experts and its actions to deal with radioactive water had been well-received.

Hikihara said Japan is still studying ways to dispose of the water and will continue to disseminate its plans. He called Moon's comments “unacceptable,” saying they were based on the assumption that the water would be discharged into the ocean.

Another Japanese official stressed that transparency was a key ingredient in conveying information about the Fukushima nuclear accident and insisted they had given detailed explanations to the international community about what was going on.

“What she said was not based on facts and scientific grounds. It is extremely regrettable since it can spread baseless negative publicity,” he said.

One option under consideration is to dilute the water and gradually release it into the ocean.

The plant had a triple meltdown after tsunami spawned by the Great East Japan Earthquake inundated the coastal site in March 2011 and knocked out its cooling systems.