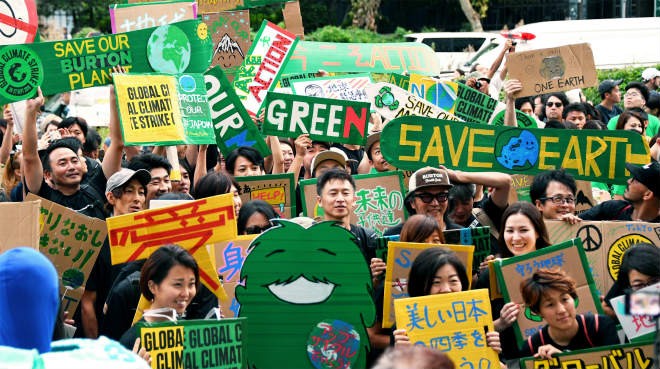 In concert with the Global Climate Strike, a youth-led protest taking place in more than 160 countries ahead of the U.N. Climate Action Summit to be held in New York next week, young people in Japan held demonstrations across the country on Sept. 20. But some organizers expressed frustration with the low turnout and apathy of their peers.

Demonstrations were held mostly in metropolitan areas such as Tokyo, Osaka, Kyoto, Nagoya and Fukuoka.

About 2,800 protesters gathered in front of the United Nations University campus in Tokyo's Shibuya Ward. Protesters marching in the streets held signs that read, “Earth is a ‘share house’ for all” and “Our house is burning.”

The demonstration in the capital was organized by a group called Fridays for Future Tokyo (FFFT). The group was formed in February by university and high school students in Tokyo who were inspired by the message of 16-year-old Swedish activist Greta Thunberg.

Sayaka Miyazaki, a 22-year-old senior student at Rikkyo University, had been working to make the planned protest a reality since May.

She said she became determined to tackle environmental issues after visiting Sweden and taking tours of companies engaged in bio gas power generation and related fields in February.

In spring, Miyazaki showed a video of Thunberg in her class. In the video, Thunberg said, “Our biosphere is being sacrificed so that rich people in countries like mine can live in luxury. It is the sufferings of the many which pay for the luxuries of the few.”

Miyazaki took the message as a call for a change in lifestyle. After showing the video to the class, she urged her fellow students to find ways to reduce plastic waste.

Their response left Miyazaki speechless. “I don’t care,” one said. “I don’t even understand what the point was,” another said.

“I wanted to change people’s awareness like Greta, but I couldn’t,” she said.

Indifference among young Japanese toward the imminent crisis of climate change has been especially notable, compared with the school strike that has taken holds in many countries.

Thunberg staged a solo sit-in protest outside the Swedish parliament building in August 2018, asserting that young people are the most affected by climate change.

Her action and message spread like wildfire through social media and struck a chord with young people worldwide, resulting in a movement called Fridays for Future, in which high school and university students in the United States and Europe boycott school on Fridays to demand urgent action to end the environmental crisis.

Thunberg was nominated for the Nobel Peace Prize.

But this level of social awareness has not spread among students in Japan.

Takuro Kajiwara, 18, an FFFT member and freshman at International Christian University, skipped his Friday requirement class for two consecutive weeks to work on planning for Japan's participation in the global demonstration held Sept. 20.

He notified his teacher that he would be absent from the class but the teacher didn’t understand, he said.

Although promoted in English-speaking countries as the “Global Climate Strike,” the FFFT and related organizations in Japan changed the name of the event held in this country to “Global Climate March” in an effort to attract more participants.

“We wanted to avoid inciting terms such as ‘strike’ and ‘demonstration,” said Saori Iwano, a 16-year-old FFFT member.

“The starting time was set up for after school to make it easier for everybody to take part,” said Iwano, a first-year student at Tokyo Metropolitan Kokusai High School.

It was not only Japanese students who thought a name change was appropriate.

According to 350.org Japan, an international environmental NGO that supported Japan's participation in the worldwide protest, it was renamed as “Pause for Climate” in Indonesia. In Pacific nations, it was renamed “Strong Winds.”

“Each country has made an effort to encourage people who are not interested in the climate change problem to join in the effort,” said 350.org Japan's Hinako Arao, 37.

Ahead of the summit where world leaders will gather to discuss climate solutions, the U.N. Youth Climate Summit is scheduled to be held in New York on Sept. 21.

The United Nations accepted applications from those aged 18 to 29 around the world, and 100 people selected from those applicants will receive U.N. support in travel expenses to New York.

Mayumi Sato, 24, of Yokohama, will represent Japan. Based in Thailand, Sato researches the impact of global warming and deforestation.

Sato said Japan's culture of non-confrontation explained the relative lack of interest in the climate crisis movement among young Japanese compared with their peers in Western nations.

“I wish that Japanese people wouldn't be so hesitant because it's our generation that really should be leading the change, especially considering we will be the decision-makers in a few, 10, 20 years,” she said.

'IT IS OUR RESPONSIBILITY'

The Sept. 20 protest was held in 163 countries and regions in Europe, the United States, Asia and Africa. More than 4 million people participated, according to organizers.

In contrast to Japan, young protesters in the United States, where demonstrations were held in more than 1,000 locations, had the backing of parents and the authorities.

In New York, more than 60,000 people joined the Global Climate Strike, according to an estimate released by the city government.

Thunberg was among those who marched through the busy streets of Manhattan holding up signs with catchy slogans.

Olivia Wolhgemuth, a 17-year-old New York City public high school student, has skipped classes every Friday since May to hold a protest with her friends outside the U.N. headquarters building to demand action on global warming. They were all inspired by Thunberg, she said.

Wolhgemuth said she initially hesitated to skip classes, but came to realize, “It is our responsibility to protest in order to protect our lives, our future and our future generations.”

Her parents supported her actions, she said.

According to a climate change survey by The Washington Post and the Keiser Family Foundation conducted between July and August, 57 percent of Americans aged between 10 and 19 are frightened by what climate change portends and 15 percent said they participated in the school strike.

Before the Sept. 20 global strike, the New York City Department of Education, which manages 1,840 public schools and 1.1 million pupils and students, announced it would not take any action against students who skipped school to participate in the demonstration.

Esther Robinson, 49, marched with her 6-year-old son. She said the catastrophic Hurricane Sandy that hit the East Coast and battered New York City in 2012 changed her attitude toward climate change.

Having witnessed the devastating damage caused by the superstorm, she realized the urgency of taking action now to stop global warming.

Robinson said that many people today feel directly affected by climate change. She viewed the school strike as a significant event and said parents and teachers, too, need to adjust to the times and express their solidarity with young people.

(This article was written by Kosuke So in Tokyo, Keisuke Katori in Washington and Gakushi Fujiwara in New York.)

This story is part of Covering Climate Now, a global collaboration of more than 250 news outlets, including The Asahi Shimbun, to strengthen coverage of the climate story.

Read other Asahi Shimbun stories that are part of Covering Climate Now:

Race is on to develop rice, fruit strains that are resilient to heat