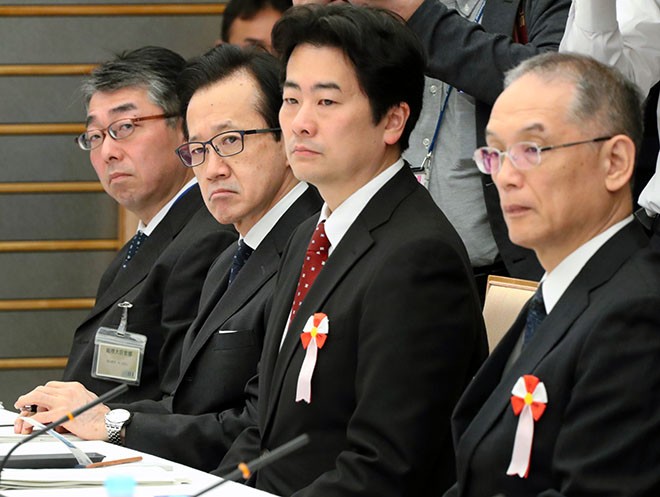 Shigeru Kitamura, second from left, in December 2018. The former intelligence officer is now the secretary-general of the National Security Secretariat, which plays a leading role in drawing up Japan’s foreign and defense policies. (Asahi Shimbun file photo)

To break impasses on key diplomatic fronts, Prime Minister Shinzo Abe is assigning his trusted aides to posts at the National Security Secretariat (NSS) and elsewhere related to foreign policy.

Abe appointed Shigeru Kitamura, one of his closest aides, to head the NSS, which plays a key role in drawing up Japan's foreign and defense policies.

The appointment of Kitamura, the top intelligence officer, and other top lieutenants to senior positions is seen as an attempt by Abe to tighten his grip over these areas.

However, the moves have raised concerns among the Foreign Ministry and other ministries as it will make it more difficult for opponents of Abe's policies to express their views.

“The NSS is supposed to deal with policy, not politics,” said a former NSS senior official. “It was expected to raise objections to the prime minister’s policy without flinching if it finds it disagreeable.”

Kitamura, 62, replaced Shotaro Yachi as the secretary-general of the NSS on Sept. 13 following a Cabinet reshuffle two days prior.

Yachi, 75, was a former administrative vice minister of the Foreign Ministry, the highest-ranking bureaucrat.

After serving as the first chief of the NSS, launched in 2014, Yachi expressed his intention to step down before the latest reshuffle, citing his age.

The NSS mainly comprises bureaucrats on loan from the foreign and defense ministries, experts on diplomacy and national security issues.

But the post went to Kitamura, who heads the Cabinet Intelligence and Research Office, which analyzes intelligence gathered in Japan and overseas, in an appointment described as “unconventional.”

The prime minister was aware that Kitamura’s appointment would not sit well with the Foreign Ministry.

“Kitamura is a special bureaucrat, even if the Foreign Ministry did not like” naming him as the NSS chief, Abe said to people around him.

Kitamura hails from the National Police Agency. He served as secretary to Abe in 2006, when Abe’s first stint as prime minister started.

Kitamura was promoted to the post of top intelligence officer in 2011 when the then Democratic Party of Japan was in power.

He remained in the position after Abe became prime minister again in 2012. He is now counted as one of his most trusted aides.

As the top intelligence officer, Kitamura built a network of contacts with his counterparts in the United States, South Korea, Russia and other countries.

He secretly met with Kim Song Hye, a senior official in charge of reunification with North Korea’s Workers' Party, in Vietnam in July 2018.

Kitamura has overseen the backstage negotiations toward a summit between Abe and North Korean leader Kim Jong Un.

But the Foreign Ministry is unhappy about Kitamura’s promotion to the NSS chief.

“Kitamura does not bring to the table what Yachi did,” said an official close to the Foreign Ministry.

One reason for appointing Kitamura as the NSS chief, rather than a senior Foreign Ministry official, was that the Abe administration and the ministry were not on the same page concerning Japan’s policy toward Russia, China and North Korea, according to a ranking government official.

The Abe administration was initially cautious about China’s so-called Belt and Road initiative, a global infrastructure plan to recreate the old Silk Road.

But it did an about-face in 2017, announcing Japan’s readiness to cooperate with the project.

Takaya Imai, executive secretary to the prime minister and a former bureaucrat with the Ministry of Economy, Trade and Industry (METI), and other aides to Abe were behind the policy reversal. Imai is said to be the closest aide to Abe.

Yachi and the Foreign Ministry were opposed to the policy turnaround, according to a senior official at the prime minister’s office.

Over Russia, Imai said in an interview in the June 2018 edition of the Bungei Shunju magazine that he and Yachi were "most opposed to each other over joint economic activities on the Northern Territories by Japan and Russia” rather than over China’s Belt and Road initiative.

The Northern Territories, a group of four islands off eastern Hokkaido, are administered by Russia, but claimed by Japan. Before the end of World War II, Japanese inhabited the islands.

On the abduction of Japanese citizens by North Korean agents in the 1970s and 1980s, the NSS under Yachi was not involved in how to respond to the long-contentious issue, according to a government official who worked for the NSS.

Although Abe pledged to bring a resolution to the abduction issue through a possible meeting with Kim, he has failed to generate tangible results so far.

No breakthroughs have been made yet over the Northern Territories issue despite Abe’s repeated vow to resolve it.

After the Cabinet reshuffle on Sept. 11, Imai was named to double as special adviser to the prime minister, making it easier for Imai to craft priority policies, whether domestic or foreign.

Hajime Hayashi, former ambassador to Belgium, is expected to be named as deputy secretary-general of the NSS. Hayashi hails from the Foreign Ministry, but he is also in Abe’s close circle. Hayashi served as a secretary to Abe when he was in office from 2006 to 2007.

Abe also sets his sights on reforming the NSS so that the desire of the prime minister’s office will be translated into policies without difficulty.

For example, the government considers expanding the NSS by establishing a new section that will take charge of economic security.

Setting up such a section at the NSS has been a growing urgency in recent years as Tokyo is increasingly taking into account the economic aspects when it makes decisions on diplomacy and defense policy toward China and South Korea.

But that also means that METI, which has enjoyed strong ties with the prime minister's office, will further its reach within the government.

“The METI’s trade diplomacy and the Foreign Ministry’s diplomacy were two separate things,” said a government official, expressing concern about the new section.

Apart from friction between the Foreign Ministry and the METI, many government officials are also uneasy about the prospect that bureaucrats from the National Police Agency will increase their sway in the prime minister’s office, such as Kitamura and Kazuhiro Sugita, who was promoted to deputy chief Cabinet secretary.

(This article was written by Yuki Nikaido, Yuka Takeshita and Ryo Aibara.)