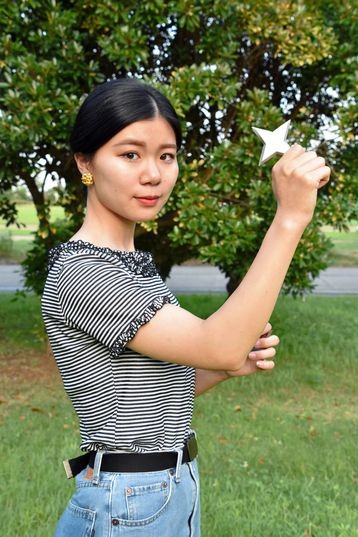 The 19-year-old has always wanted to be a ninja, and her passion never wanes.

Her daily practice is part of her activities at the Ninja Club founded in 2018, which is officially approved by Mie University.

Suzuki, a sophomore student of the school’s Faculty of Humanities, played a key role in establishing the club. She now serves as the second-generation president.

Suzuki, who was born in Nara Prefecture, was raised in Tsu. She has always loved samurai TV dramas such as “Mito Komon” from an early age, and also became interested in “shugenja” ascetic hermits and “onmyoji” practitioners of "onmyodo," a type of esoteric cosmology.

But she became particularly fascinated by ninja when she was a junior high school student. When she was watching the “Nintama Rantaro” animated TV show, she found herself admiring ninja novices who develop superhuman skills by diligently making continuous efforts.

With her sheer determination to become a ninja, Suzuki studied hard to get into Mie University, where Yuji Yamada, 52, a leading expert in ninja studies and professor in the school's Faculty of Humanities, teaches.

When she was admitted to the university after graduating from the prefectural Tsu Higashi Senior High School, Suzuki attended Yamada’s class and kept asking him to set up a ninja club in questionnaires. And when Yamada invited her to join an unveiling event for a shuriken throwing dojo (martial arts gym) that opened at the back of the Faculty of Humanities building, she went straight to the professor and begged him to form the club.

In June last year, the Ninja Club was established with Yamada attached as adviser. Suzuki served as vice president even though she was a first-year student at the time, before moving on to serve as president since March this year.

The club caused quite a stir after it was featured in newspapers and TV. But it was also an emotionally difficult time for Suzuki because she got caught up in coordinating requests for media coverage. It has become easier for her to focus on her ninja activities now that the dust has settled.

There were nine members at the inception of the club, but the figure has grown to 19. Suzuki also makes strenuous efforts to promote ninja culture, especially online. In collaboration with the “Tokugawa Ieyasu and Hattori Hanzo Ninja Squad” formed to promote tourism in Aichi Prefecture, she has created videos to see whether ancient ninja techniques are practicable and distributes them on YouTube. She also shares scenes from her club activities and other information on Instagram and Twitter.

“I want to convey ‘ninjutsu’ techniques to younger generations in an understandable way to promote ninja whose charms are not limited to just jumping around,” Suzuki said.

The president loves practicing interesting ninjutsu techniques from ninja books, such as “ongyo-jutsu” skills for hiding from enemies, with fellow club members.

“I get stage fright, so before I have to appear in public or take exams, I concentrate by reciting ‘Kuji Goshin-ho’ single-mindedly, going, ‘Rin-Pyo-To-Sha-Kai-Jin-Retsu-Zai-Zen.’”

The good thing about being a member of the Ninja Club is that “I receive interest from people wherever I go and have a lively conversation.”

Meanwhile, she feels uncomfortable about female ninja being referred to as “kunoichi.”

“I don’t want to draw a distinction just because they are female,” Suzuki said. “Ninja are ninja.”

“The top priority for ninja was to remain low profile,” Yamada added, because it is said, among other reasons, that they were usually engaged in agriculture to hide their backgrounds during the Warring States period (late 15th to late 16th centuries). It’s not the reason why, but Suzuki is publicity-shy herself. She also finds it uncomfortable to wear ninja attire on her own.

The club’s motto is “Learning ninja in a fun, leisurely manner.”

After college, she wants to find a career that allows her to continue her involvement in ninja, such as working as a curator at the Ninja Museum of Igaryu in Iga, also in Mie Prefecture.