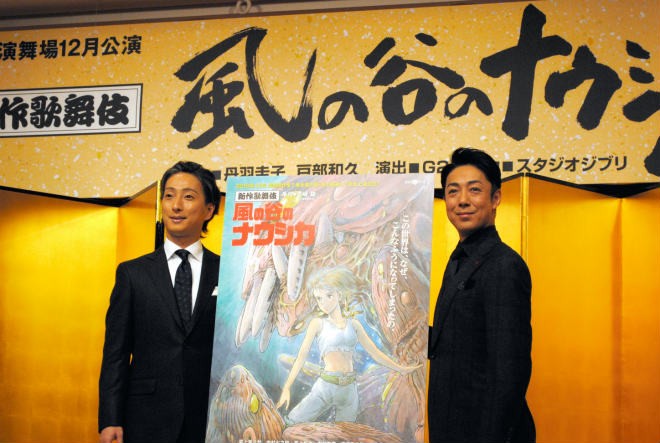 Onoe Kikunosuke, right, and Nakamura Shichinosuke at a news conference to talk about the first Kabuki adaptation of Hayao Miyazaki’s acclaimed “Nausicaa of the Valley of the Wind” in Tokyo on Sept. 30 (Koji Fujitani)

Kabuki superstars Onoe Kikunosuke and Nakamura Shichinosuke are all pumped up at the chance to appear in the first Kabuki adaptation of Oscar-winning filmmaker Hayao Miyazaki’s masterpiece, “Nausicaa of the Valley of the Wind.”

The play will open in Tokyo in December.

“I have been prepping for this for five years, and now it's finally getting under way. I’m trembling with excitement and anticipation,” said Kikunosuke, who proposed the adaptation and will play the protagonist, Nausicaa.

He held a news conference in Tokyo on Sept. 30 to talk about the theater production and was joined by Shichinosuke, who will portray the antagonist, Princess Kushana of an allied nation called Tolmekia.

“It is so gratifying that we have the opportunity to play it in Kabuki, our home,” Shichinosuke said. “I hope all of us, the actors and directors, coalesce and produce a great stage work.”

Kikunosuke is not one to be shy about taking a nontraditional approach to classical theater.

“Nausicaa” was a popular manga series, first published in 1982 and which ran until 1994. The story revolves around a young girl, Nausicaa, caught in the crossfire of a war-torn, contaminated world where scientific civilization has been destroyed, seeking ways to ensure the survival of mankind.

Kikunosuke said he was captivated by the original story’s thematic depth and grand sweep. He was also drawn by Nausicaa's strength of character and sweetness.

“The story depicts a dystopia, not a utopia, and was originally created in the late 1980s when Japan was in the grip of the bubble economy and became restless,” Kikunosuke said.

“I am also fascinated by the way the present day has caught up with the themes featured in the story, such as war, energy concerns and environmental and nuclear issues,” said Kikunosuke, explaining what made him want to produce a Kabuki version of Miyazaki’s iconic work.

“I am looking forward to seeing what kind of interactions occur when these universal and epic themes are integrated with Kabuki," he said. "I also see it as a coming-of-age tale of Nausicaa.”

Kikunosuke also wanted Shichinosuke, who costarred in “Mahabharata,” to be part of the project.

“(Kikunosuke) called me and asked me to help him. I was genuinely surprised,” Shichinosuke said.

Miyazaki co-founded Studio Ghibli and worked on classic animated films such as “Totoro” and “Spirited Away.”

“’Nausicaa’ is Miyazaki's most important work,” said Toshio Suzuki of Studio Ghibli, who produced the film version of “Nausicaa” with Miyazaki. “He put his heart and soul into it, and 'Nausicaa’ is what lies at the core of him.”

Suzuki also revealed there had been offers from Hollywood and elsewhere to make a live-action adaptation of “Nausicaa,” but Miyazaki turned down every proposal. A Kabuki adaptation was a different thing altogether, however.

“When I told him about the project five years ago, I thought he (Miyazaki) would dislike it. But, for some reason, he said, ‘I will do it. Let’s do it,’” Suzuki said.

Miyazaki set two conditions: Don’t change the title and don't ask him to give news conferences.

The script of the Kabuki version of “Nausicaa” is based on the original manga compilation consisting of seven volumes.

The play will be divided into two parts, with a matinee and evening performance.

According to Japanese entertainment production company Shochiku Co., which owns a number of major Kabuki theaters, it will be an epic-scale saga, unusual for a new Kabuki play.

Shochiku vowed to respect the integrity of the original work with regard to the story title and characters’ names and personalities. For acting, costumes and staging, classic Kabuki will rule the day.

“I want to direct it in a style that follows classic Kabuki to the best of my ability,” said the stage producer G2, who adapted a popular manga series “Naruto” for the Kabuki stage.

Keiko Niwa, who has worked with Miyazaki on films such as “The Secret World of Arrietty” and also on “Gedo Senki” (Tales from Earthsea), will write the script, together with Kazuhisa Tobe of Shochiku.

The Kabuki version of “Nausicaa” will be peformed at the capital’s Shinbashi Enbujo theater from Dec. 6 to Dec. 25.