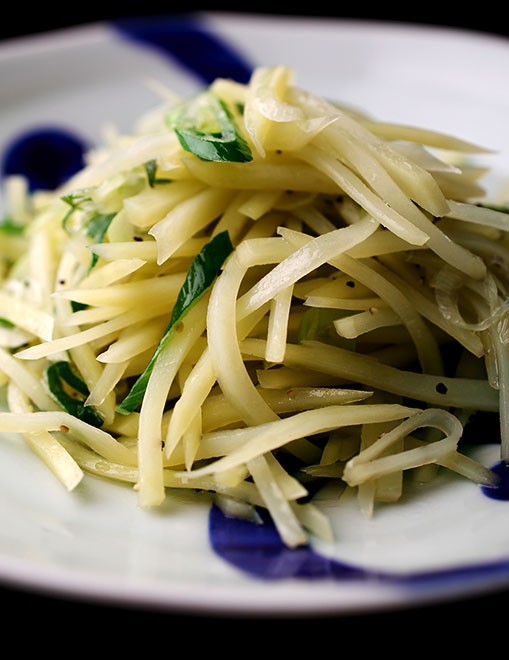 The potato is a versatile vegetable used in “nikujaga,” a simmered dish with meat, curry rice, potato salad and more. It is also a dependable ingredient available year-round at a reasonable price.

The fact that its texture changes completely depending on the cooking process is another pleasing aspect. Not only the different flavors but also the textures will be explored in a three-part series.

The opener is a “crispy” stir-fry that is quite unlike the familiar “mealy” dishes. Choosing the right type of potato is key. The May Queen variety was chosen, as it is less likely to fall apart when stir-fried.

After cutting the potatoes into fine strips resembling matchsticks, they should be immersed in water. By rinsing off the starch, the strips will not stick together when cooked and turn out crisp.

The fine balance of the tender green onion, spicy black pepper and the subtle sour taste of vinegar will keep you from setting down your chopsticks. This dish and beer are definitely compatible.

The dish will become an autumn fare if mushrooms such as “maitake” and “enoki” are used instead of green onion.

The textures and colors of the potato vary according to the type. The round Irish Cobbler (“Danshaku” in Japan) is floury and works well as boiled mealy potatoes or mashed potatoes. The long egg-shaped and smooth-textured May Queen is less likely to fall apart when cooked and suits simmered dishes such as curries and stews.

The potato, which is native to South America, became popular in Japan during the Edo Period (1603-1867). The Danshaku and the May Queen were introduced in the Meiji (1868-1912) and Taisho (1912-1926) eras, respectively. New varieties that suit certain cooking processes are being developed. The “Tokachi Kogane” is suited to frying, and the “Sayaka” makes a good salad.

At Tokyu Store, which operates a chain of supermarkets mainly in the Tokyo area, as many as five to seven varieties including “Inka no mezame,” which are bright yellow and sweet, are sold. “Kitaakari,” which is mealy and sweet, is said to be quite popular lately.

1. Peel potatoes and finely slice lengthwise. Stack two to three slices and cut into fine strips (PHOTO A) preferably with a thickness of about 2 mm. A slicer may be used. Fit colander in bowl filled with water. Immerse potato. When water becomes clouded, change water 2 to 3 times and leave for about 5 minutes (PHOTO B). Finely slice green onion.

2. Pull out colander from water, sprinkle a pinch of salt (1/2 tsp) on potato and mix thoroughly with hand. Leave for about 5 minutes and when tender, squeeze out water. By removing excess water, the potato will turn out crispier.

If the potato is turned into a crispy salad, unlike the familiar potato salad featuring boiled ones, it will become a side dish that goes well with Japanese or Chinese cuisine. Finely cut 2 potatoes into strips as in the case of stir-frying. Bring water to a boil in a pot, add the potato and let it come to a quick boil and remove on a colander. Mix with 1/2 tsp salt and 1 Tbsp sesame oil and cool by fanning. Mix 4 slices ham cut into fine strips with cooled potato in bowl. Add 1 tsp vinegar and mix.

The main component of the potato is starch. Although the starch particles in the cells are small, they will absorb the water content of the cell fluid when heated. They will swell, gelatinize and become sticky. When the potato is cut and stir-fried directly, the starch on the surface will cause the pieces to stick together. To prevent this, the starch should be rinsed off with water.