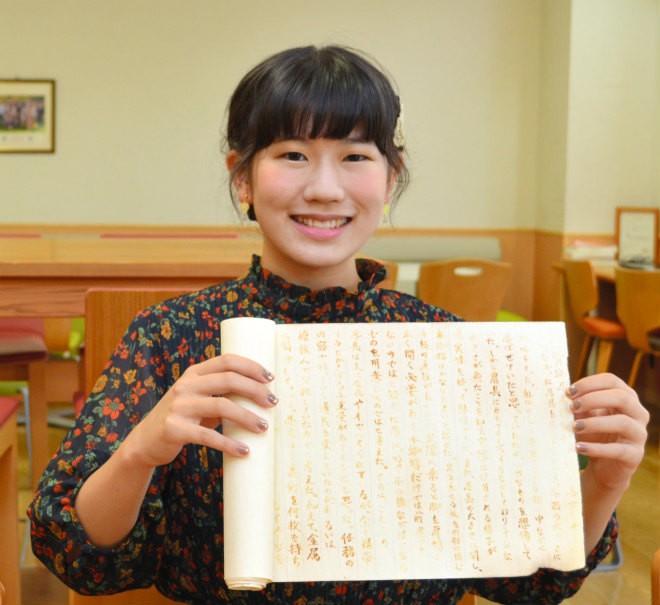 Eimi Haga shows off her essay written with a ninja technique at Mie University in Tsu on Sept. 13. (Naoyuki Mori)

TSU—A first-year university student’s essay on ninja featured blank sheets of paper. But when the mystery behind her submitted assignment was revealed, she received an “A” from her professor.

The student and professor are part of Mie University, which is located near Iga in Mie Prefecture and Koka in Shiga Prefecture, both of which are famous for their ninja clans.

The university set up the International Ninja Research Center in Iga in 2017 to unlock the mysteries of the undercover agents. The following year, the university started offering a course to study ninja and their skills within its graduate school.

A formally designated ninja club, whose members practice throwing “shuriken” stars behind a school building, was introduced as well.

Eimi Haga, 19, a first-year student at the university’s Faculty of Humanities, Law and Economics who hails from Nagoya’s Nakamura Ward, joined the ninja club. She was invited to the group following the entrance ceremony.

Haga also decided to take the class on the history of ninja provided by leading ninja researcher Yuji Yamada, 52, a professor of Japan’s ancient and medieval religious history and adviser to the ninja club. Haga said she has been interested in the feudal-era agents since she watched the TV anime series “Nintama Rantaro” in her childhood.

When Haga was told by the professor to write an essay on her visit to the Ninja Museum of Igaryu in Iga, she hit upon the idea of “working out an essay that no one has written before.”

She decided to adopt a ninja communication technique under which characters are written with soybean extract. Letters written that way become invisible when dried but they become visible again when heated with fire.

After finding the way to write with soybean ink on the Internet, Haga bought soybeans at a supermarket, soaked them in water for one night and crushed them in a mixer.

She squeezed the crushed soybeans in a cloth, mixed the extract with water and applied the mixture to a brush. Haga tested the soybean ink on three kinds of traditional “washi” paper.

The type of paper typically used for calligraphy practice burned up over a gas stove. But she found that secret messages emerge well on a thicker sheet of washi measuring 20 centimeters wide and 80 cm long.

Haga submitted the hidden essay along with a note stating, “Please read it after heating the paper.”

Yamada exposed the homework to fire, admired her idea and decided to give it an “A.”

“The essay is creative because a ninja technique is reproduced on it,” he wrote in his remarks on her work.

Haga, who is learning the skills to hide herself on campus, reads books dating back to the Edo Period (1603-1867) that detail ninja techniques. She also memorizes the agents’ unique letters as part of ninja club activities held each Wednesday evening.

The student said the sneaky agents may have been different from modern people’s image of them.

“Studying ninja is interesting because what I believed sometimes turns out to be wrong in the process,” Haga said. “If given a chance, I want to write an essay using another ninja technique.”