Beppu 'onsen' offers chance to recharge, along with smartphone 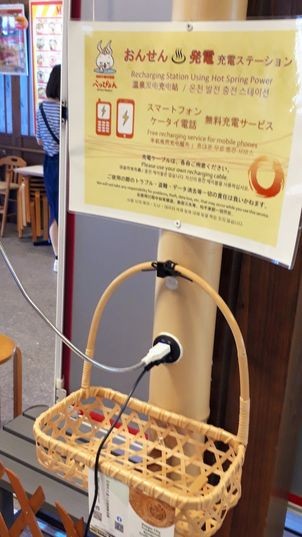 BEPPU, Oita Prefecture--Fans of "onsen" bathing never need worry about whether their mobile devices have run out of juice while they are relaxing in this famed southern hot spring resort.

That's because of an experimental thermal energy conversion technology system that kicked off Sept. 19 at the popular Kannawa onsen tourist facility in the Furomoto district.

The charger system targeting users of smartphones and other electronic devices will be accessible to sightseers and other visitors until the end of January.

The aim is to show visitors that spa water can be used for numerous purposes, including generating electricity. The area is bracing for an influx of foreign visitors during the Rugby World Cup that ends Nov. 2.

“Giving many visitors from outside Japan the chance to experience new ways to use geothermal energy will have great significance,” said Beppu Mayor Yasuhiro Nagano at a ceremony to mark the start of the trial.

According to city officials, the system generates a small charge utilizing the difference in temperatures between close to 100-degree spa water springing from the ground at the rear of the Kannawa facility for a large communal bath and the outside air, which is normally between zero and 30 degrees.

The system generates an output of only 2.5 watts, which is stored in a battery. People can recharge their mobile devices by connecting them with any of six sockets on a pillar inside Kannawa through USB ports during its business hours. There is no charge for the service.