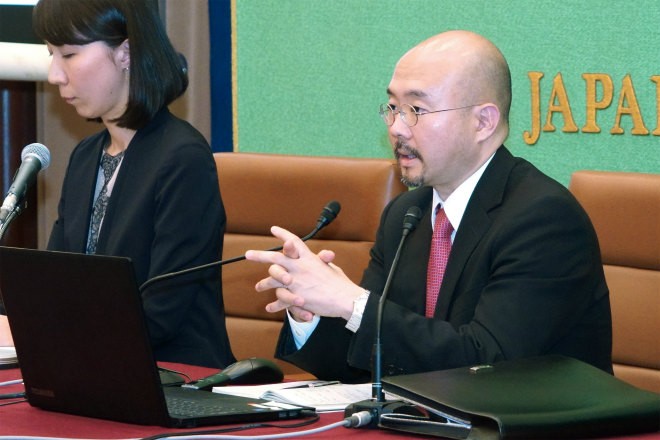 Venezuela's ambassador to Japan rebuked a Japanese bank for effectively freezing his and other diplomats' accounts out of concerns that their use ran afoul of U.S. economic sanctions recently imposed on the country.

"It's incomprehensible that a bank based in a third country, like Japan, has violated the Vienna Convention stipulating the protection of diplomats by citing U.S. sanctions," Ambassador Seiko Ishikawa said.

The accounts, frozen since September, concern five with SMBC Trust Bank belonging to the ambassador, his wife and other diplomats.

Ishikawa said that the accounts could not be used for Internet banking as well as withdrawing and transferring money via ATMs.

In response to his inquiry, a bank official told Ishikawa that the accounts were frozen as a result of economic sanctions by the Trump administration against Venezuelan President Nicolas Maduro’s government.

A senior official with the bank's Hiroo branch later visited the embassy and explained that their dollar accounts were frozen because of concerns that certain transactions ran against President Donald Trump's executive order signed Aug. 5.

The order blocks Venezuelan government property and assets, including those of individuals who assist the country's officials.

Ishikawa is a second-generation Japanese-Venezuelan born to Japanese parents. His wife is Japanese and they have four children with Japanese nationality.

The ambassador argues that the freezing of diplomats' bank accounts is in violation of the 1961 Vienna Convention on Diplomatic Relations.

The treaty spells out the privileges of diplomats abroad so that they can perform their duties without fear of coercion or harassment by the host country.

He also said the freeze violated the human rights of the Venezuelan foreign service personnel and his family.

After Ishikawa discovered that he was unable to pay for his children's school expenses and have credit card payments withdrawn from his bank account, he consulted the Japanese Foreign Ministry and other entities.

A bank official then notified Ishikawa on Oct. 3 that his yen account would be reactivated, but not his U.S. dollar account.

In an interview with The Asahi Shimbun, a bank representative said the freeze was imposed to examine whether allowing use of the accounts violated the regulations set by the U.S. Department of Treasury.

The official insisted that it was not a total freeze of the accounts in question, as the SMBC Trust Bank approved some transactions after documents explaining their nature were submitted at the request of the bank.

However, the process was time-consuming, and one of the diplomats had to wait four hours to pay for rent and other expenses at the bank counter, according to the embassy.

Asked about the matter, the Foreign Ministry told The Asahi Shimbun that it “cannot discuss the handling (of accounts) by individual financial institutions.”

It added that the ministry "will receive staff at the Venezuelan Embassy and people related to the embassy appropriately based on the Vienna Convention.”

It is not the first time that foreign diplomats in Japan have been affected by U.S. economic sanctions.

Cuba's ambassador to Japan was denied a room at a Hilton hotel in Fukuoka in October last year on the grounds that he represents a country under U.S. sanctions.

Although Fukuoka city officials issued an administrative directive to the hotel not to refuse accommodation based on a prospective guest's nationality, citing Japanese business law, the Hilton maintained its stance that as a U.S. company it was obliged to comply with U.S. law.