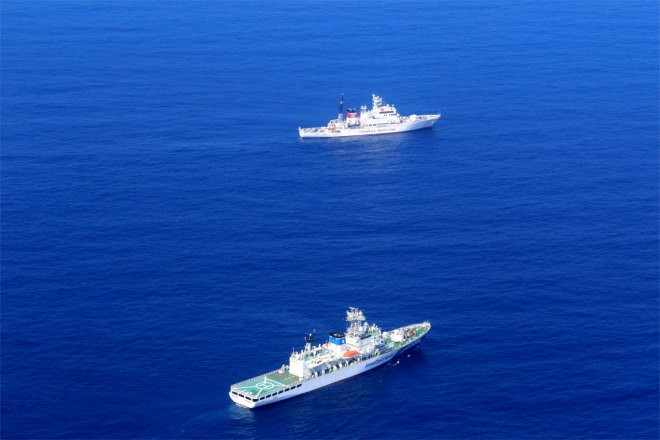 A Fisheries Agency patrol vessel collided with a North Korean ship in a prime fishing area in the Sea of Japan on Oct. 7, throwing the intruding vessel's crew overboard.

The incident occurred at 9:05 a.m. around the Yamatotai fishing grounds while the patrol vessel Okuni was monitoring for ships intruding into Japan's exclusive economic zone, according to the Japan Coast Guard.

The North Korean ship sank around 9:30 a.m., tossing tens of crew members into the sea.

Four agency patrol vessels and three coast guard ships rescued more than 20 people from the sea as of 4:30 p.m. when the search ended, the coast guard announced in the afternoon.

There were no reports of any severe injuries.

According to the agency, the Okuni confirmed that the North Korean ship had been in the EEZ, and ordered the trespassing ship to leave before the collision.

The coast guard believes that the bow of the Okuni likely collided with the fishing boat.

No major injuries were reported on the Okuni.

The Japanese government conveyed a brief overview of the incident to North Korea and started arrangements on how to deal with the rescued crew members.

North Korea has yet to issue a response.

The collision site is about 350 kilometers northwest of the Noto Peninsula in Ishikawa Prefecture. The Yamatotai fishing grounds is in a shallower area and is known to be good for catching "surumeika" (Japanese flying squid).

Illegal fishing by North Korean ships has increased in the area since around autumn 2016.

Since 2017, the coast guard and the Fisheries Agency have enhanced their patrols in the area.

The coast guard has issued warnings to 1,016 North Korean ships to leave the waters as of the morning of Oct. 7.