GOHAN LAB/ Fried potatoes: Make your home fries crispy and fragrant, yet soft and fluffy inside 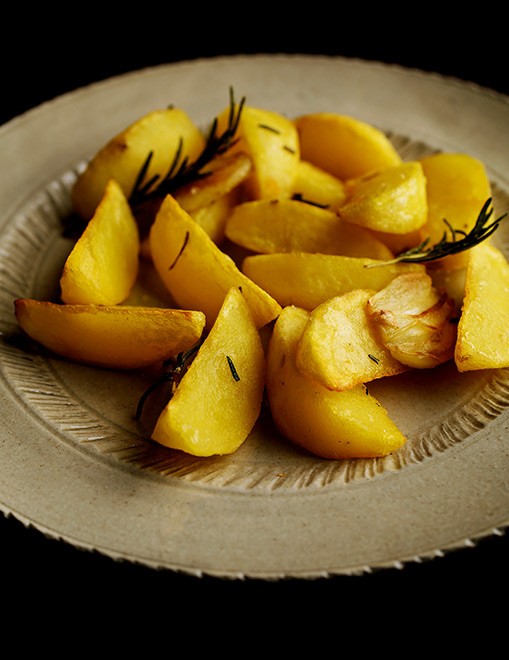 Fried potatoes are so popular that you even see shops specializing in them. When you bite into a piping hot, slightly golden fry, the mushy sweetness of the potato that is soft and fluffy spreads in your mouth. If you've ever wanted to make them at home, this second part of our series on potatoes will give you the skills to do so.

Instead of deep-frying your potatoes in a generous amount of oil, pan-fry sliced pieces golden in half a tablespoon of oil. A key is to parboil the potatoes first. By boiling them in saltwater with a saline concentration of 1 percent, your pan-frying time will be reduced, and the fries will take on a light salty taste that will lessen the amount of salt you will need to sprinkle on them when they're done.

We recommend you use the Danshaku potato variety. To draw out their maximum sweetness, patiently boil them whole. Cut them in wedges and cook them in olive oil seasoned with garlic and rosemary and you'll get fried potatoes that are crispy, fragrant yet soft and fluffy inside. The refreshing aroma of the herbs will fuel your appetite.

Dusting the fries with grated lemon zest will make them even more special.

When cooking potatoes that are rich in carbohydrates and vitamins, we are told to remove the sprouts.

This is because the sprouts and green skin contain a minute amount of the toxic glycoalkaloid (PGA). When potatoes are exposed to the sun or are immature and small, the amount of PGA is said to increase, causing nausea and a stomach ache when consumed in large quantities. The agriculture ministry has called on the public to remove the sprouts and parts around them as well as the green skin with a high PGA concentration when cooking. Store your potatoes in a cool, dark place.

1. Peel potatoes and place in pot with saltwater with saline concentration of 1 percent (10 grams salt per liter of water) and place on lower medium heat. Cook 20 to 30 minutes. When you can push a bamboo skewer into one smoothly, turn off stove and pour out hot water (PHOTO A).

2. Cut potatoes into eight equal-size wedges (PHOTO B). Cut garlic in half and crush with flat side of kitchen knife or bottom of bottle.

3. Pour olive oil in frying pan, add garlic and place over low heat. When garlic starts to sizzle, flip them over, turn off heat and put in your potatoes (PHOTO C). Turn on heat to low, cook slowly without stirring.

4. Turn one or two pieces to check color. If browned, turn all pieces over. Tear rosemary and sprinkle on potatoes. Shake frying pan to aromatize them. Turn off heat, sprinkle a pinch (2 grams) of salt on top and mix.

Kuniaki Arima is the owner-chef of Passo a Passo, an Italian restaurant in Tokyo’s Fukagawa district.

Katsuyuki Ishihara is the head of the research department of Calbee Inc.'s Research and Development Group. The snack-food maker studies characteristics of potatoes, such as the PGA content of potato chips.

Wash 3 potatoes thoroughly and boil in pot with a liter of water and 10 grams salt. When they are tender enough for a bamboo skewer to enter them smoothly, cut into eight equal pieces.

Cut 1 clove garlic in half, crush it and place it in a frying pan with 1/2 Tbsp olive oil. Place on low heat. Once aroma rises, add 60 grams of bacon cut into 1 cm-wide strips.

When fat starts to separate from the bacon, add 1/4 of an onion, finely sliced. When onion becomes tender, remove it and bacon. Lay potato pieces in pan and cook in bacon fat. Return bacon and onion, tear rosemary and sprinkle on top.

Turn off heat. Sprinkle a pinch of salt over potatoes.