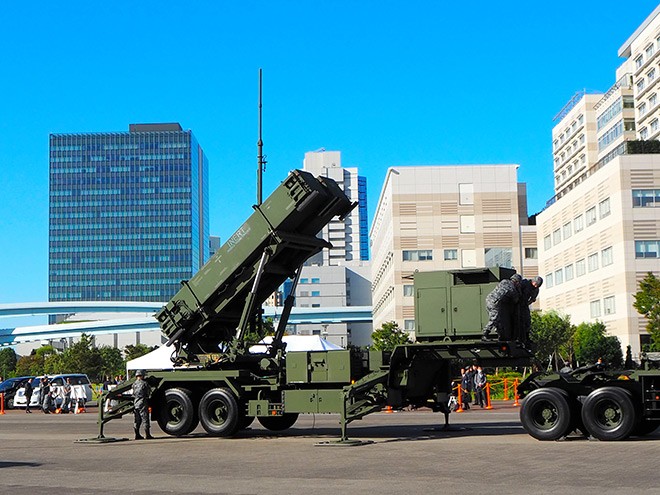 Members of the Air Self-Defense Force deploy the PAC-3 surface-to-air interceptor during a drill at a park in Tokyo’s Koto Ward on Oct. 9. (Yoshitaka Ito)

The Self-Defense Forces held a drill to deploy PAC-3 surface-to-air missile interceptors at a Tokyo park on Oct. 9, the first such exercise to be held outside its facilities or U.S. military installations in six years.

The PAC-3, or the Patriot Advanced Capability, is designed to take out ballistic missiles attacking Japan.

During the exercise, a unit with the Air SDF’s Iruma Air Base in Saitama Prefecture followed procedures to deploy missile launchers, a radar tracking missiles, a power-supply vehicle and other equipment to respond to a potential enemy attack at the Tokyo Rinkai Disaster Prevention Park in Koto Ward.

No live ammunition was used.

Most drills take place within the premises of SDF facilities since outside locations require scrupulous coordination with local authorities hosting the drill.

The latest exercise materialized as the Defense Ministry, the Tokyo metropolitan government and Koto Ward were amenable to the plan, according to the ministry.

Although the ASDF drill followed 11 missile launches by North Korea since May, the ministry denied the exercise was in any way a response to Pyongyang’s provocative actions. It said the PAC-3 training was planned a long time ago.

Japan’s defense strategy against ballistic missiles is to intercept them with the Maritime SDF’s Aegis destroyer carrying SM-3 missiles as a first line of defense. If that fails, the ASDF's PAC-3 will be deployed to shoot down incoming missiles.

As part of upgraded missile defense, the ministry also plans to deploy the land-based Aegis Ashore.