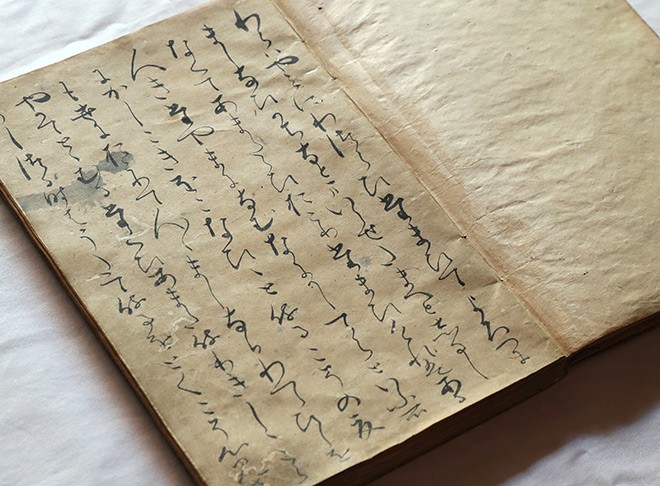 KYOTO--Experts confirmed the authenticity of a chapter of the oldest manuscript of Japanese classic novel “Genji Monogatari” (The Tale of Genji) that was discovered in storage at a home in Tokyo.

The manuscript of “Wakamurasaki” is the fifth Genji chapter confirmed to have been transcribed by poet Fujiwara no Teika (1162-1241), Reizeike Shiguretei Bunko, a foundation in Kyoto’s Kamigyo Ward, announced on Oct. 8.

The “Wakamurasaki” chapter depicts one of the highlights of the epic: The protagonist, Prince Genji, meets a girl who later becomes his wife, Murasaki-no-ue, the second-most important character of the tale.

The public interest foundation manages cultural properties belonging to the Reizei family, which has ancestral ties to Teika. The manuscript was found in February at the Tokyo home of Motofuyu Okochi, the 72-year-old current head of the Okochi family of the Mikawa-Yoshida feudal domain (today’s Toyohashi in Aichi Prefecture).

The manuscript, 21.9 centimeters long and 14.3 cm wide, had been kept in a large oblong chest in a storeroom.

A family record showed that the manuscript has been in the possession of the Okochi family since it was handed down from the Kuroda family of the Fukuoka feudal domain in 1743.

On Okochi’s request in April, the Reizei family studied the manuscript and the foundation later confirmed its authenticity.

“The Tale of Genji” is believed to have been written in the 11th century by noblewoman Murasaki Shikibu. However, none of her signed manuscripts of the novel has remained.

The manuscripts transcribed by Teika, a poet in the early Kamakura Period (1185-1333), are believed to be the oldest in existence and are known collectively as “Ao-byoshi-bon” (blue book-cover version).

The other four confirmed chapters from Teika’s manuscripts are “Hanachirusato,” “Miyuki,” “Kashiwagi” and “Sawarabi,” all of them now registered as national important cultural properties.

Experts concluded that the newly discovered “Wakamurasaki” chapter was transcribed by Teika based on a number of reasons. For example, the front cover of the manuscript was in blue, and the handwriting of text and a slip of paper on which the book title was written was identical to that of other manuscripts by Teika.

Junko Yamamoto, a professor at the Kyoto University of Advanced Science who specializes in literature of the Heian Period (794-1185), could not contain her excitement over the discovery.

Yamamoto said existing research on the “Wakamurasaki” chapter has relied on manuscripts completed about 250 years after Teika’s work.

“It is very significant that this discovery of the manuscript edited by Teika will be available for researchers,” she said.

(This article was written by Masanori Kobayashi and Jiro Omura.)