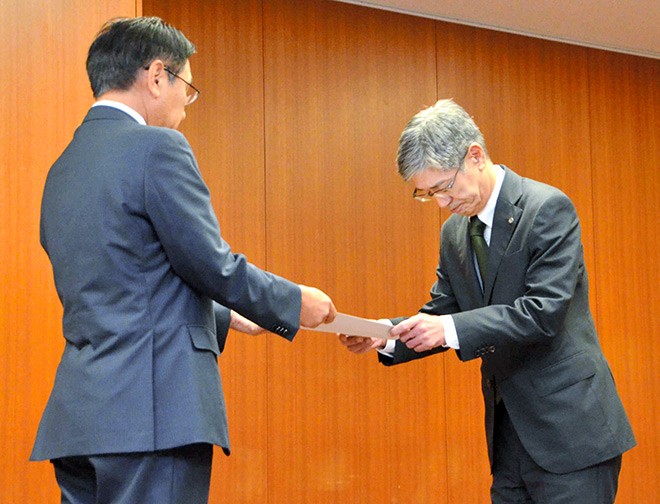 The transport ministry slapped Japan Airlines Co. with a second business improvement order over a string of alcohol-related incidents, including one for which a co-pilot served 10 months in prison from last year in Britain.

In response, JAL announced disciplinary measures for all 42 executives, including President Yuji Akasaka, who will take a 40-percent pay cut for three months.

Under the first order, six executives were punished.

"We acknowledge that this is a serious and critical situation," Akasaka said Oct. 8 after the order was issued. "We will work on preventive measures with unwavering resolve."

It is the first time the ministry has told the same airline twice to improve its oversight over alcohol consumption by crew members. It issued its first warning to JAL last December.

Calling on the airline to shape up, the ministry made clear that if things do not improve it may have to order a grounding of JAL flights.

After the first order following the arrest and conviction of the co-pilot in Britain for being highly intoxicated before a flight to Tokyo, it introduced breathalyzer devices that are difficult to cheat and revised a training program to ensure that personnel understood the restrictions on alcohol consumption.

The ministry has revoked the co-pilot's license, the first time it has done so.

Even since this past April, JAL pilots have been found to have consumed alcohol at unacceptable levels ahead of flights.

The ministry contended in the improvement order that individual JAL pilots have not fully recognized the dangers that alcohol consumption poses to flight safety.

It called on the airline to clarify the responsibility of the company management and warned that if further incidents occur, "it could order the grounding of designated flights."

The ministry also issued a business improvement advisory to Skymark Airlines Inc. over alcohol consumption, as well as a strong warning to Japan Transocean Air, a member of the JAL group.

The ministry is fleshing out criteria related to alcohol consumption. It has until now only banned drinking alcohol eight hours before a flight, but does not stipulate the consumption amount.

The ministry decided it takes one hour for 4 grams of alcohol to dissipate from the body based on expert opinion.

Airlines will be required to incorporate the criteria into their in-house regulations by the end of this month.