Akira Yoshino, an honorary fellow with Asahi Kasei Corp., receives flowers after being named co-winner of the Nobel Prize in Chemistry and gives a news conference in Tokyo on Oct. 9. (Kazuhiro Nagashima) 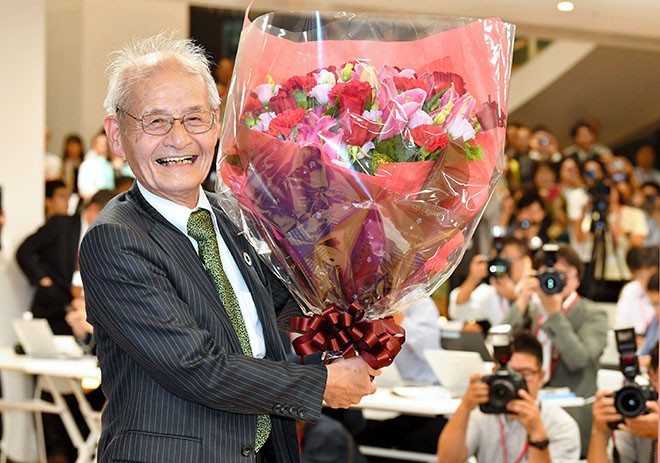 Akira Yoshino, an honorary fellow with Asahi Kasei Corp., receives flowers after he was named as one of three recipients of this year’s Nobel Prize in Chemistry on Oct. 9. (Hiroyuki Yamamoto)

Akira Yoshino, an honorary fellow with Asahi Kasei Corp., is one of three co-recipients of this year’s Nobel Prize in Chemistry for developing the basic technology of rechargeable lithium-ion batteries, the Royal Swedish Academy of Sciences announced Oct. 9.

Rechargeable batteries have revolutionized contemporary lifestyles and are used worldwide as power sources for smartphones, electric vehicles and other devices as they can hold immense amounts of energy despite their small size.

Yoshino came up with the idea for using lithium cobalt oxide, a more stable alloy developed by Goodenough at Oxford University and other researchers, as the battery cathode and carbon material as the battery anode, leading to a prototype for the lithium-ion batteries now in use.

Yoshino is the 27th winner of the Nobel Prize from Japan, after last year’s Tasuku Honjo, a distinguished professor at Kyoto University who won the Nobel Prize in Physiology or Medicine.

He is also the eighth recipient of the chemistry prize following Ei-ichi Negishi, a Purdue University chemistry professor, and Akira Suzuki, professor emeritus at Hokkaido University, who were among three winners in 2010.

The awards ceremony will be held in Stockholm on Dec. 10.

Yoshino, born in Osaka Prefecture in 1948, graduated from Kyoto University, majoring in petrochemistry. After receiving a master’s degree at the university’s graduate school, he joined what is now Asahi Kasei in 1972.