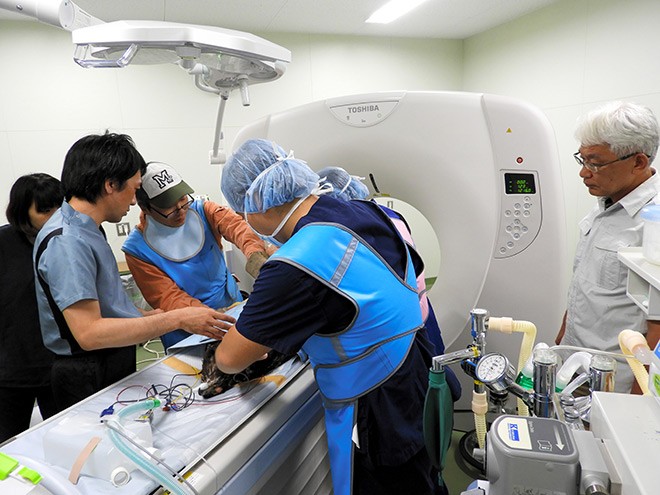 “Our aim is to provide advanced therapy by focusing on animal welfare,” said Daisuke Fukui, an associate professor of veterinary science at the university who is a specialist veterinarian.

He noted that the university-affiliated hospital has a range of teachers with expertise in a wide variety of fields.

Set up in April, the new department has dealt with five kinds of creatures so far, including a Japanese golden eagle and a spotted seal, at the request of zoos, aquariums and other facilities in the Tohoku region.

The department came into being in response to a dire situation facing many zoos and aquariums across Japan.

According to Fukui, the facilities often have medical divisions on their premises, but only one veterinarian is on hand in many cases, due to personnel shortages and other reasons. In worst-case situations, no veterinarians are available.

A Malayan bear, an endangered species, apparently died at Sapporo Maruyama Zoo in 2015 because the facility was unable to offer proper measures to treat an injury.

After a female giraffe named Yuzu kept at Morioka Zoological Park died in 2017, the zoo operator admitted “there were inadequate aspects in the way the animal was kept and treated.”

Veterinary science departments of colleges around Japan primarily center on treating domestic animals, along with dogs, cats and other small creatures, meaning there are few programs to learn about wild animals displayed at zoos and aquariums.

“New veterinarians who have just graduated from college have to examine wild animals without any know-how,” said Fukui, 46. “There are few people they can turn to, leaving them to occasionally agonize over their difficulties alone.”

The new department invites veterinarians working at zoos, aquariums and other outside facilities to join the treatment team to hone their skills.

“Accumulated experience leads to a higher level of diagnosis and therapy quality,” said Fukui. “We are trying to share our advanced techniques with more veterinarians.”