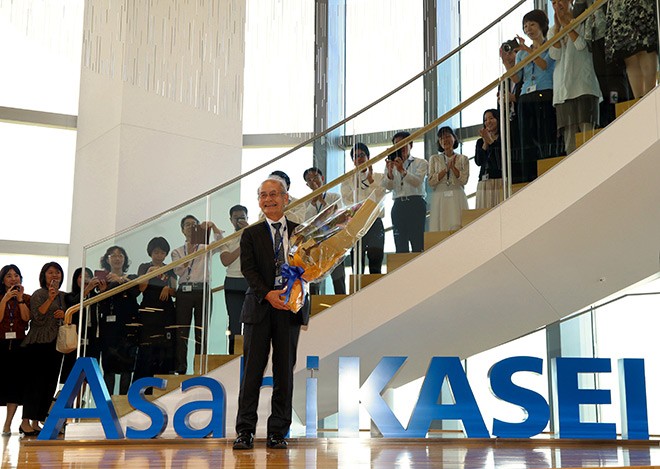 Sporting an infectious smile and beaming with happiness, 71-year-old Akira Yoshino was greeted with thunderous applause and flashing camera bulbs as he entered a room packed with supporters.

“I myself am ecstatic,” Yoshino told reporters on the evening of Oct. 9 after he was named a co-recipient of this year’s Nobel Prize in Chemistry. The chemist is sharing the prestigious award with two others for developing the basic technology of rechargeable lithium-ion batteries.

“I am delighted that the prize recognizes this field of research,” Yoshino said. “I think this gives young researchers great encouragement.”

GOT WORD ON LANDLINE PHONE

Yoshino, an honorary fellow with Asahi Kasei Corp., said the Royal Swedish Academy of Sciences in Stockholm called him on his land-line phone in his office to break the news.

“Congratulations!” was the first thing the caller said.

“Here it comes! That’s what I thought,” Yoshino said, recalling the moment.

The first thing he did after cradling the phone was to call his 71-year-old wife, Kumiko.

“She was almost paralyzed with surprise,” Yoshino said, drawing laughter from those attending the news conference held at the headquarters of Asahi Kasei in Tokyo’s Chiyoda Ward.

When asked what qualities make a great researcher, Yoshino replied without hesitation, “Flexible thinking, and its direct opposite: tenacity of purpose. You've got to be persistent and never give up until the end.”

A successful researcher must also be able to control the “balance of hardness and softness,” Yoshino said. “When you face a big hurdle, you also need to have a flexible mind-set and say, ‘It’s gonna be alright.’”

As a power source for smartphones, electric vehicles and other devices, rechargeable lithium-ion batteries have transformed the fabric of modern life. Yoshino had been tipped to win a Nobel for many years.

Ruminating on that period, Yoshino said, “The fields for the (Nobel Prize in Chemistry) are so varied, and the turn for recognizing the technology in devices just took a long time coming.”

He recalled that he used to tell himself, “When the turn comes, I will definitely accept the prize.”

Yoshino is sharing the award, which comes with a total of 9 million kroner (about 100 million yen, or $930,000) in prize money, with John B. Goodenough of the University of Texas at Austin and M. Stanley Whittingham, who is with Binghamton University, State University of New York.

Yoshino is the 27th Nobel Prize winner from Japan.

Clearly savoring the acclaim, Yoshino was keen to explain the contribution rechargeable batteries have had on the environment.

He said a “mega storage battery system” will eventually be created to power electric vehicles and others, which will “make it easier for unstable technologies such as solar batteries and wind-generated power to become popular.”

In a surprising confession, the chemist admitted to being initially resistant to use a mobile phone, the device made possible by the rechargeable batteries that he and his fellow chemists developed.

“I only bought a smartphone five years ago," he said. "It was my first ever mobile phone. I have never used a flip phone.”

The room once again erupted into laughter.

Anticipating a big announcement from the Royal Swedish Academy of Sciences was likely, about 100 employees of Asahi Kasei gathered in front of a projector screen to watch a live feed from Stockholm, starting around 6:30 p.m.

The crowd went wild, knowing Yoshino’s name had to follow.

As soon as it did, a thunderous applause filled the room as people jumped up and down, did high-fives and shook hands with each other.

But the person bursting with the most pride was not there, but at Yoshino’s home in Fujisawa, Kanagawa Prefecture.

“I am happy. That’s all,” a grinning Kumiko told reporters who flocked to her home that evening.

She said she received a call from her husband on her smartphone around 6:20 p.m.

“I have too much going on,” he said. Kumiko heard a bustling noise on the other end of the line.

“Did you (win)?” Kumiko asked, anticipating good news, to which Yoshino only gave a noncommittal answer.

But his wife knew. “Congratulations,” she gushed as she went to hug her second daughter, 35, who waited with her mother to watch the news at home.

“I married a salaryman and never considered my husband as a researcher, let alone a Nobel Prize recipient,” Kumiko said.

SITS AROUND AT HOME

According to Kumiko, Yoshino does not talk about his research and his work when he is home.

“There is a huge gap between him outside and him at home,” Kumiko said. “I don’t know if I should tell this, but he just loafs around at home and sleeps most of the time.”

She said that when her husband was in his 30s, he routinely worked late into the night and devoted himself to research even on holidays.

Kumiko knew he was doing research on batteries because he often left samples of batteries and chargers in the living room.

Yoshino is fond of drinking, particularly Japanese sake. His second daughter lives nearby, and her 42-year-old husband often joins Yoshino over drinks at home.

He also plays tennis on occasion in a neighborhood park, as well as golf.

Building on work of others was key to lithium-ion batteries

The one book that set Akira Yoshino on his Nobel course