Police: Gang member guns down 2 at rival’s office in Kobe 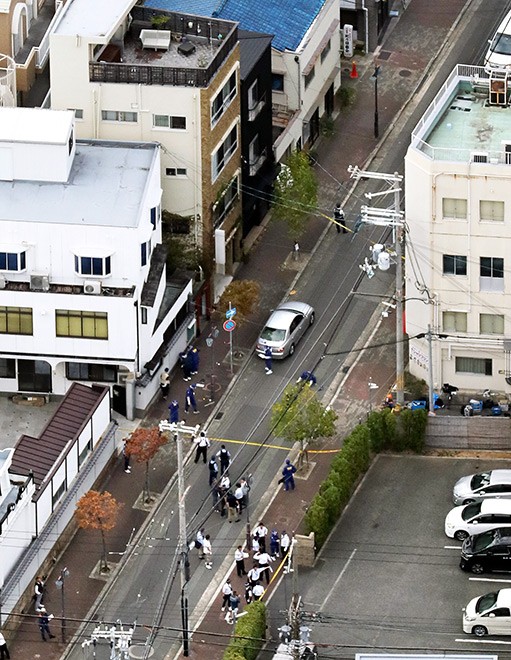 KOBE--Two members of a criminal gang under the Kobe Yamaguchi-gumi were shot dead outside their Chuo Ward office by a member of a rival group on Oct. 10 as he talked to police, according to the Ikuta Police Station.

Police officers on the scene at around 2:40 p.m. immediately arrested Toshio Maruyama, 68, on suspicion of attempted murder.

Maruyama is a member of Kodo-kai, a rival organization under the Yamaguchi-gumi, Japan's largest organized crime group.

Hyogo prefectural police upgraded the charge to murder after the pair, who belong to Yamaken-gumi, a core gang under the Kobe Yamaguchi-gumi, were confirmed dead at a hospital.

Police officers were questioning Maruyama, a native of Kagoshima, during their patrol around the office building when he suddenly fired upon the two men as they approached him, according to the Ikuta Police Station.

The police confiscated two handguns he had in his possession.

Maruyama, apparently posing as a magazine writer with a camera and seemingly waiting for an opportunity to attack, was seen scoping out the area about four hours before the incident.

With Yamaguchi-gumi's No. 2 leader Kiyoshi Takayama scheduled to leave prison soon, police are ramping up security out of concern that the violence could escalate.