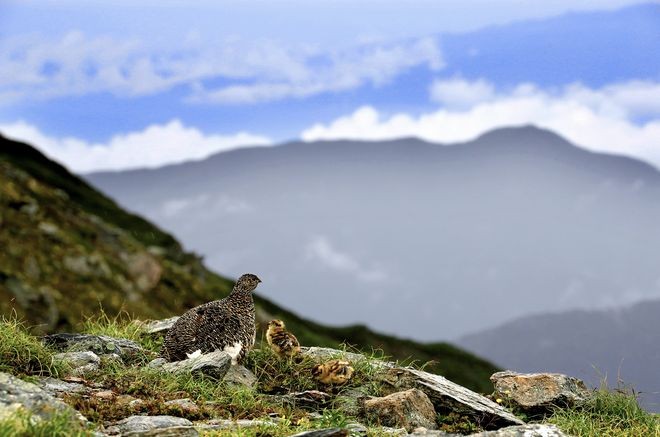 A rock ptarmigan rears her chicks near the summit of Mount Kitadake in Minami-Alps, Yamanashi Prefecture, on July 11. (Yasuhiro Sugimoto)

MINAMI-ALPS, Yamanashi Prefecture--The number of rock ptarmigans, a designated special natural treasure threatened with extinction, is estimated to have increased 3.5 times during the five years of a cage protection program in Mount Kitadake here.

In the 1980s, 63 rock ptarmigan couples were spotted around the 3,193-meter-high mountain.

However, the number of couples had dwindled to nine by 2015, with the total number of the birds estimated at 23, according to researchers. That year, the cage protection program started.

Under the program, the chicks are raised in covered cages with their parents for a month to protect them from predators and rain. The largest cage is 1.5 meters high, 2 meters wide and 4 meters in depth.

This summer, 32 couples were confirmed, and the total population was estimated at 80.

Sixteen of 18 chicks that were raised in cages were released into nature after a month of protection. As of the end of August, 11 chicks were confirmed alive.

“It will be too late to take action if the rock ptarmigan becomes like the now-extinct Japanese crested ibis and oriental white stork,” said Hiroshi Nakamura, professor emeritus at Shinshu University who is in charge of the cage program along with the Environment Ministry. “We need to prevent the number of rock ptarmigan from decreasing now.”

Under the program, the chicks and their mothers are released from the cages to walk around for six hours in a day.

One volunteer per rock ptarmigan family watches the birds from a distance. They observe whether the chicks learn how to survive in nature from their mothers, such as capturing food and being aware of danger.

The volunteers also help out. They clap their hands to drive away kestrels, a raptor that is the rock ptarmigan’s natural enemy.

The cage protection continues for one month from early July.

Rock ptarmigan chicks start to hatch during the rainy season in early July. Many die in the rain because they cannot adjust body temperatures.

In addition, foxes and martens living in satoyama, a nearby farming area, have expanded their territory to highland areas and are attacking the chicks more frequently.