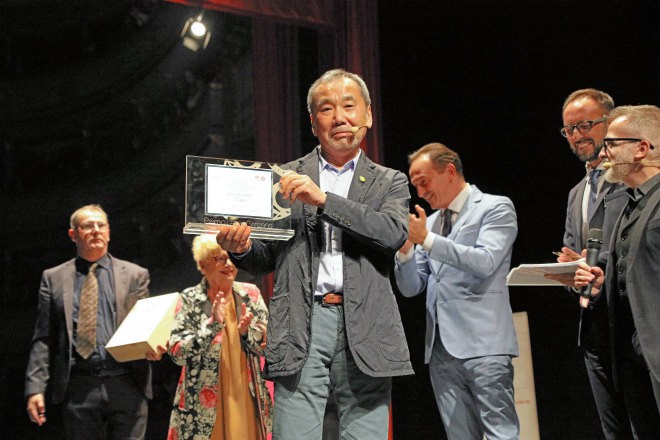 ALBA, Italy--Internationally acclaimed novelist Haruki Murakami has won an international literary award, but it's not the Nobel Prize in Literature that his legion of fans have long awaited.

Instead, Murakami, 70, has been named this year’s winner of the Italian literary award presented by the Fondazione Bottari Lattes.

The Japanese author attended the award ceremony held at a theater in Alba in northern Italy on Oct. 11.

In front of 900 enthusiastic fans, Murakami spoke about his career and the role that novelists have played in the world.

In the lecture titled, “A small bonfire in a cave,” he first talked about how he started writing a novel at the age of 29, after running a jazz club in Tokyo.

“I knew I cannot write like (Honore de) Balzac and (Fyodor) Dostoevsky, but I thought I could probably write a story in my own way,” Murakami said. “The history of novels has existed since the days when human beings lived in caves."

To Murakami, stories being told in front of an open fire are the original novels. He said these stories gave people a sense of temporary relief from their hunger and fear.

Novelists are descendants of such storytellers, Murakami said.

“There is no pleasure like being able to be the light that shines in the darkness in various places in the world,” Murakami said, concluding his speech.

The award has been given to famous writers including Patrick Modiano, a French writer and Nobel laureate in literature, and Amos Oz, a writer and journalist from Israel, who died in December 2018.