Writer Osamu Dazai celebrated in films 71 years after his death 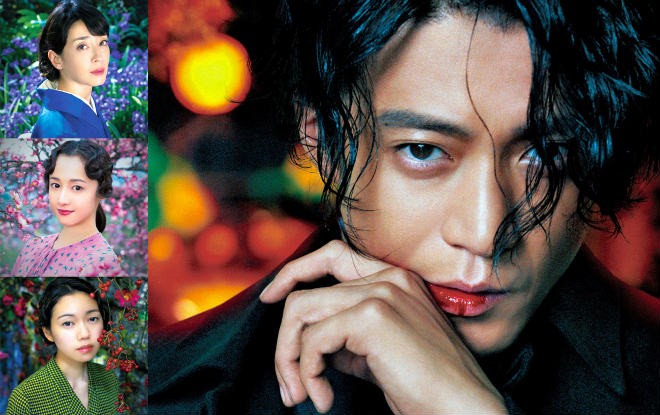 Osamu Dazai, considered one of Japan's foremost novelists of the 20th century, still remains in the spotlight 71 years after his death at age 38.

Celebrating the 110th anniversary of his birth this year, a live-action film inspired by Dazai’s representative work, “No Longer Human,” is currently showing in Japan. And an animated movie based on the same novel will be released in late fall.

“No Longer Human” recounts how the protagonist, suggestive of Dazai (1909-48) himself, is addicted to alcohol and drugs that are his undoing. The phrase, “Mine has been a life of much shame,” is all-too-familiar.

The live-action film of the same name, which was theatrically released on Sept. 13, was directed by Mika Ninagawa. It is a fact-inspired fiction that explains how the novel came to be written.

According to producer Fumitsugu Ikeda, 40, the project to make a film from the novel came about because the story “has a universality about it that goes beyond time.”

Director Ninagawa developed a huge interest in Dazai in his later years and the women with whom he associated.

The story is mainly set in Mitaka, western Tokyo, where the writer moved to in 1939. Dazai’s house and other city buildings were replicated for the film.

The protagonist, Dazai, is played by Shun Oguri, with Rie Miyazawa cast as his wife Michiko, Erika Sawajiri as his lover Shizuko Ota and Fumi Nikaido as another lover, Tomie Yamazaki.

In 1947, Dazai fathered a daughter with Michiko and another with Shizuko. After he finished writing “No Longer Human” in 1948, Dazai and his “last lover” Tomie took their lives by drowning together in the Tamagawa Canal.

“In the end, they all end up seemingly happy,” Ninagawa said about the three women in Dazai's life, while Ikeda added: “I think it is a film that turns our traditional values upside down.”

Meanwhile, the protagonist of Fuminori Kizaki-directed “Human Lost,” an animated sci-fi movie scheduled to arrive in theaters on Nov. 29, is Yozo Oba, just like in the original novel. However, the story is set in Tokyo in “Showa Year 111.”

The animated version portrays a society where death has been conquered by advances in medical treatment while economic disparity, environmental pollution and decadence have become widespread.

The screenplay was penned by writer Tow Ubukata, famed for “Tenchi Meisatsu” and other novels.

According to executive producer Mitsugu Iwano, 45, the Dazai novel was picked for “inspiration” to produce a film marketable overseas because his works are well-recognized at home and abroad.

The original story was restructured in an audacious manner while its profound view on life and death, as well as its literary quality, were passed on to the animated adaptation.

“I wanted to make a film that wouldn’t betray Dazai,” Iwano said.