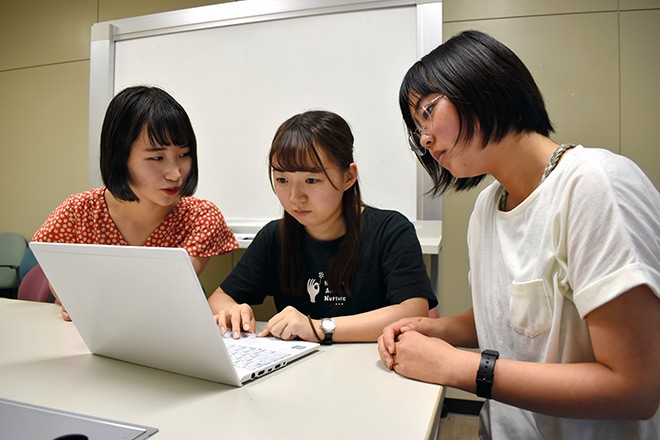 Members of the Social Media Association monitor Twitter posts at the University of Hyogo in Himeji, Hyogo Prefecture, in August. (Kumiko Nakatsuka)

Hyogo prefectural police have sought the aid of the Social Media Association at the University of Hyogo too identify cases of “papa katsu,” literally “daddy activity,” where teens seek out adults on social media for dating and sexual relationships in exchange for financial benefits.

In August, an SMA member discovered a Twitter post that said, “I'm looking for someone who can meet me tomorrow for papa katsu. I'm really desperate for money, and I'd like you to give me cash.”

Eleven of the association’s 70 members monitor social media posts in rotation that could lead to child prostitution and other criminal activity. They report their findings to the juvenile section of the Hyogo prefectural police once a week.

Based on their reports, the police send warnings to the students who wrote the posts and any adults who tried to contact them.

The association began helping monitor posts in June. In the three months through August, police sent warnings to 103 female and male students and 16 adults.

Most of the posts have already been made inaccessible. While some were deleted by users, others were made unavailable after Twitter suspended the accounts.

According to the association and other sources, papa katsu posts are often uploaded by “ordinary kids looking to find an easy part-time job.”

“Children don't understand how dangerous it is to meet with strangers,” said Karin Kitamura, 19, an SMA member. “I want them to value themselves.”

That tactic is still a rarity throughout the country.

Under conventional police methods, undercover officers pretend to be sugar daddies and meet with minors to steer them from prostitution. But the strategy is time and labor intensive.

The association also organizes educational programs on how to use the Internet for students in elementary school through college age.

“It's essential to ensure an online environment where those in trouble can find adults who’ll lend a helping hand earlier than information on papa katsu,” said Kaho Shiotsu, 21, who heads the cybercrime prevention team. “We want to help more people understand how to gain safe information over the Internet.”