Lisa’s In and Around Tokyo: Zushi/Yokosuka area--Chase an international dream to organic pastures 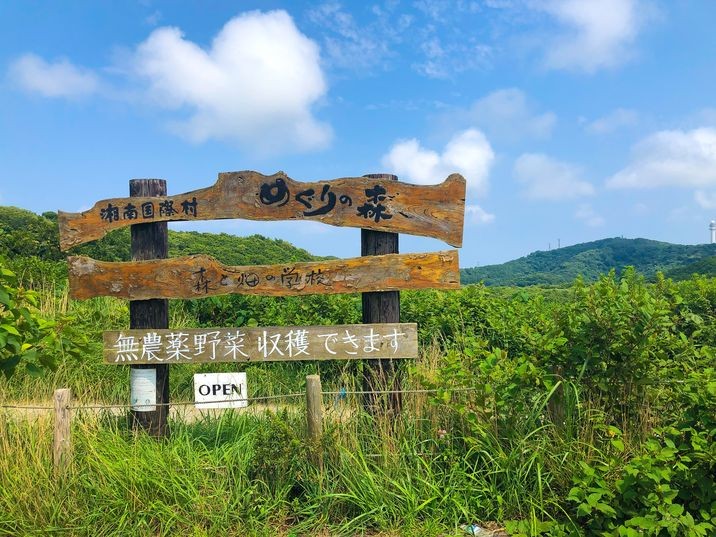 The signboard for Meguri no Mori where citizens, businesses and public agencies join forces in activities involving greenery and produce organic vegetables. (Photo by Lisa Vogt)

My friend moved to Sushi, I thought I heard, but it turned out that the place name was Zushi in Kanagawa Prefecture. “There’s decent sushi, too,” she giggled, then added, “and a Michelin-starred soba shop. Come visit, and I’ll show you around.” With this, I spent a day filled with laughter in her neck of the woods.

We met at the famed noodle shop and ordered tofu, grilled duck and noodles. The prices were reasonable and the food not bad, but it was a “chumon-no-ooi-ryoriten” experience. For example, after each item arrived, virtually no catching up with each other was possible. It was just eat and no talk because after only a few minutes, we were first nudged then instructed to savor the food.

Mind you, I’m a chef myself, so I know how it feels when dishes that I lovingly create are not consumed in a timely manner. But boy oh boy, the proprietor must have a stopwatch and stalking tendencies because I swear on my mother’s pearls that the food was not sitting on the table for more than the time it takes for a cup of instant noodles to be ready, so help me God.

We left the restaurant chuckling and went to Shonan Kokusai Mura in Yokosuka city. It was not what I imagined it to be. I had previously gotten the ski area Joetsu Kokusai wrong, too. And what is it with so many trout fishing spots in Japan having Kokusai in their names?

I wrongly assumed that these “international” places were legacies somehow connected to the 1964 Tokyo Olympics. It turns out that Shonan Village is a conference center that was part of a grand development scene planned during Japan’s bubble years and opened in 1994.

Nearby, I came across a rugged, paint-peeling sign stating. “Harvest Pesticide-free Vegetables.” It seemed out of place, and when I called the thumb-tacked cellphone number, I was told that we could harvest and take home a basketful of veggies for a few thousand yen, provided there was someone on the premises.

Trekking down to the farm would have made for unhappy shoes, so I passed. Google revealed that “Meguri no Mori is a place where people can meet and connect with nature, and together engage in making a forest.” A nice concept!

While fetching some holy spring water from nearby Sekineontakifudo, I inadvertently got drenched from head to toe, and we howled with laughter! I bid Yokosuka and my friend farewell and went home with a big smile.

This article by Lisa Vogt, a Washington-born and Tokyo-based photographer, originally appeared in the September 8 issue of Asahi Weekly. It is part of the series "Lisa’s In and Around Tokyo," which depicts the capital and its surroundings through the perspective of the author, a professor at Meiji University.