Announcements in Ainu set to start in Hokkaido on train routes 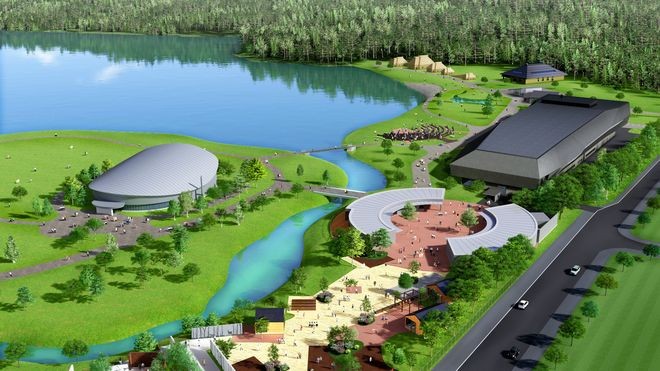 A rendering of the National Ainu Museum and Park (Upopoy) that is slated to open in Shiraoi, Hokkaido, in April 2020 (Provided by the Agency for Cultural Affairs)

Hokkaido Railway Co. (JR Hokkaido) will start making train announcements in the Ainu language from spring, but only on some limited express services.

The system is set to coincide with the scheduled opening of the National Ainu Museum and Park (Upopoy) in Shiraoi, Hokkaido, in April.

The facility marks a new-found awareness that the Ainu are indigenous people of Japan, something the Diet only recognized earlier this year.

The railway company said it is keen to help promote the new cultural attraction.

When a limited express train approaches JR Shiraoi Station, the closest stop to the museum, an announcement in Ainu will state: “For passengers visiting the National Ainu Museum and Park, Upopoy, please get off the train at Shiraoi Station.”

This will be followed by an announcement in Japanese to explain what was said in Ainu.

A recorded greeting in Ainu language, “Irankarapte” (Hello), will also be played on some limited express and rapid-transit airport trains that depart from Sapporo Station and Shin-Chitose Airport Station.

The Ainu greeting will be played before the regular on-train announcement that says, “Thank you for using JR Hokkaido today.”

“We want to join the effort to bring excitement to the opening of Upopoy," said Osamu Shimada, president of JR Hokkaido. "I hope (the Ainu announcement) will provide an opportunity for people to become interested in (the museum)."