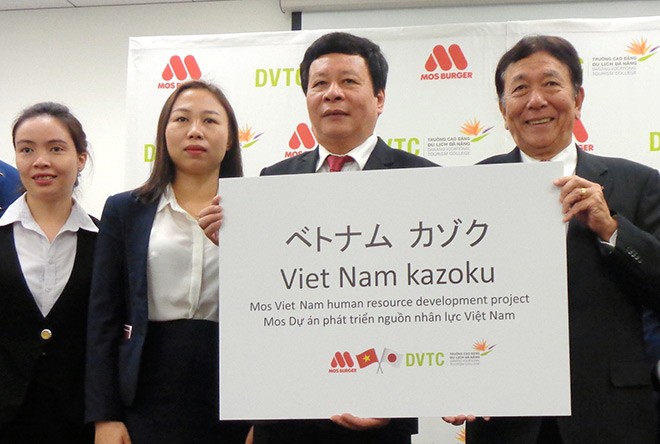 Mos Food Service Inc. said it will hire 350 Vietnamese people who obtain the new specified skills visa over four years, but bureaucratic red tape could slow the plans of the fast-food chain operator.

The company, which runs Mos Burger restaurants, intends to open outlets in the Southeast Asian nation using Vietnamese who gain experience by working in Japan.

As part of the plan, the company said Oct. 15 that it recently started a joint education program called “Viet Nam Kazoku” with the Danang Vocational Tourism College, a national junior college in Vietnam. “Kazoku” means family in Japanese.

The one-year education program includes a Japanese language course offered by the college as well as lessons on knowledge and skills in the restaurant industry. It also covers specialized terms used in the Mos Burger chain.

Those who complete the program will then take the exam for the specified skills visa for the restaurant industry. The new visa was introduced in April mainly to help alleviate labor shortages in certain sectors.

Mos Food Service intends to employ 50 successful candidates in 2020 and 100 annually in the following years.

They will mainly work at restaurants in Japan directly managed by the Mos Burger chain. The company says their salaries and benefits, including allowances for rent, will be equivalent to those for Japanese full-time employees.

The planned new hires are connected to Mos Food Service’s larger plan of expanding business operations to Vietnam as early as 2020 through a joint venture with a local company.

After the maximum five-year period of their visas expires, the Vietnamese will return to their home country to take senior positions at the joint venture. They will be tasked with such work as operating and managing the company’s restaurants in Vietnam.

“I want to help raise education levels in Vietnam and contribute to the country’s growth,” Atsushi Sakurada, chairman of the company, said at a news conference on Oct. 15.

Le Duc Trung, president of the college, said, “I’m hoping that our students will learn Japanese culture and knowledge and will be able to work at companies in Japan.”

Many Japanese companies are actively hiring Vietnamese workers. Mos Food Service’s program could set an example for other companies to follow.

But it is unclear whether the company’s program will proceed as planned.

The Japanese government expects to accept up to 53,000 foreign workers for the restaurant industry under the specified skills visa over five years. That is the largest number following the nursing-care sector.

Since April, 1,546 applicants have passed exams held three times in Japan for the specified skills visa for the restaurant industry.

However, only 23 people were granted the specified skills visa by early October, according to a restaurant industry organization.

It takes time for the Immigration Bureau to review whether applicants are qualified for the visa.

“I had to submit application documents again and again. It took five months to receive approval,” said a senior official working in the restaurant industry.

The first exam outside Japan for the visa will be held in the Philippines in November. The Japanese government has not decided if it will conduct the exam in Vietnam.