Tourists warned in Shiretoko that leaving garbage could draw bears 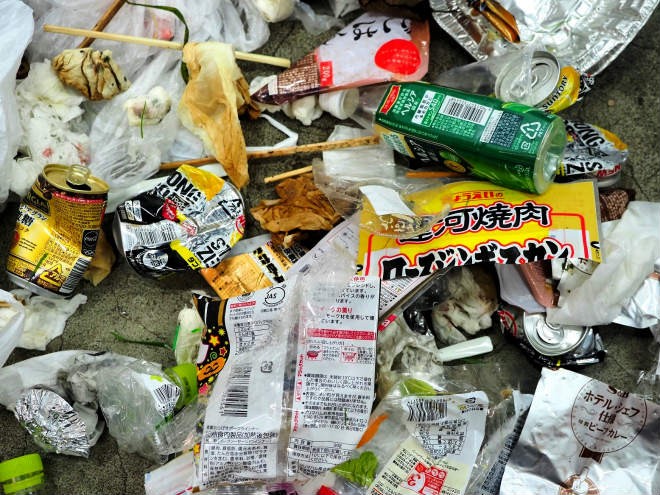 SHARI, Hokkaido--When guide Tsuyoshi Ito found a rice ball wrapper, dirty paper plates and other trash scattered along a Hokkaido prefectural road in Shiretoko, he became alarmed at what was more than just a simple case of littering.

Ito, 38, who works for Shiretoko Koropokkuru, a local nature guide firm in the Utoro district here, knew that such garbage could attract bears.

“The moment I spotted the trash, I thought it was terrible and was shocked that there are still some people who could do such a thing,” Ito said. “I told the tourists whom I was guiding then that the experience of eating human food could change the demeanor of bears and lead them to harm humans.”

Ito contacted the Shiretoko Nature Foundation, which quickly sent two staff members to the scene and confirmed that the trash filled a 30-liter garbage bag. The leftovers had already been scavenged through by animals.

The environmental group, which engages in activities to preserve the local environment, is cautioning sightseers not to leave food waste and other kinds of trash in a UNESCO World Natural Heritage site here. They also are calling on visitors not to give food to wild animals, so that the creatures will not harm humans.

“I do not know who threw away the waste, but the culprit must be a visitor to Shiretoko,” said Kasai. “As brown bears stay close to their food source, their memories of the taste of humans’ food is really dangerous. I definitely want those who visit Shiretoko to understand that.”

The natural parks law bans dumping much garbage in Shiretoko. In Shiretoko in 2013, a man threw away a large amount of leftovers along with meal box containers, violating the waste management law. Papers on the case were later sent to prosecutors.

The area where Ito found the debris is in a location where many sightings of brown bears have been reported. If those bears consumed leftovers in garbage and started associating humans with food, that could spur them to attack tourists.

Ito discovered the trash left behind a fence set up between the edge of a prefectural road and a mountain slope as if to be hidden from view.

They included a rice ball packaging bearing the name of a shop in Sapporo, dirt-stained paper plates, empty cans and plastic bottles, according to Ito.

Shiretoko is popular with visitors and traffic congestion on weekends and on other occasions has become a concern as well.

There is a parking space to accommodate several cars near a spot beside a river where brown bears frequently show up to catch salmon that swim upstream from the ocean to spawn.

Photographers and sightseers often stay there for long hours to watch the bears during the salmon spawning season around October.