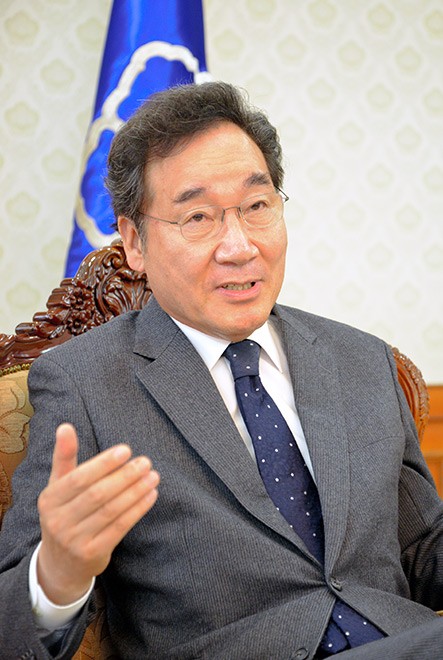 South Korea’s Prime Minister Lee Nak-yeon in an interview with The Asahi Shimbun in Seoul on Oct. 16 (Takeshi Kamiya)

SEOUL--South Korean President Moon Jae-in is considering sending a personal letter to Prime Minister Shinzo Abe in the hope that it could lead to a summit between the two countries, whose relations have become increasingly strained over wartime laborer and other issues.

South Korean Prime Minister Lee Nak-yeon indicated the possibility in an exclusive interview with The Asahi Shimbun in Seoul on Oct. 16, saying that he would deliver the document when he meets Abe in Tokyo on Oct. 24.

He said Moon is determined to improve relations with Japan, which have rapidly deteriorated since South Korea's top court ordered a Japanese company to pay compensation to wartime Korean laborers from the Korean Peninsula in an October 2018 ruling.

In response, the Japanese government began tightening controls over exports of materials for high-tech products to the country in July. South Korea then announced in August its decision the following month to scrap the General Security of Military Information Agreement (GSOMIA).

Lee said he hopes that his talks with Abe will lead to a meeting between the countries' respective leaders and pave the way for improved relations.

"The president is hopeful that several issues between the two countries will be resolved while he is in office, even if it is difficult to do so in a short time," Lee said. "He is deeply concerned about relations between South Korea and Japan."

On the issue of wartime laborers, Lee said the president is considering measures that would be acceptable to the plaintiffs and their supporters, as well as convincing to the public, without elaborating further.

"Diplomatic authorities are continuing their talks and can accelerate their discussions," he said. "The president believes that the wartime laborers issue should not keep South Korea and Japan from being future-oriented in their relations.”

Moon is likely to express his desire for improved bilateral ties in his letter, if realized.

Lee added that he would like to see the countries return to the relationship they had prior to July, saying, “What matters most is that the leaders of both countries share the unshakable determination to improve bilateral ties.”

South Korea’s prime minister is second in command to Moon in the administration, aiding the president in domestic affairs.

Lee’s interview comments are believed to have been coordinated with the presidential office in advance, serving as a message for Japan from the Moon administration.