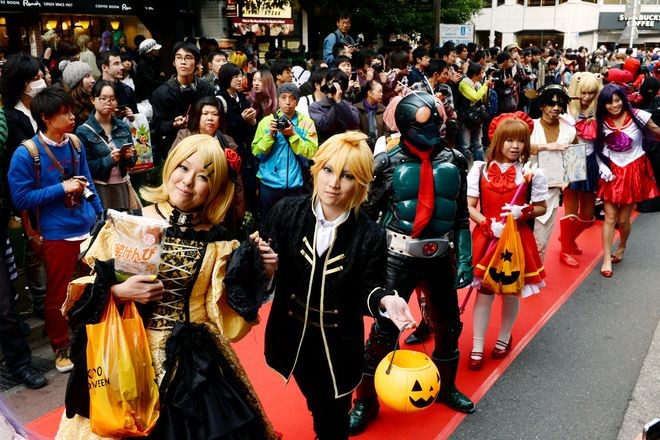 Dressed as Kamen Rider, Sailor Moon and other characters, participants in the Ikebukuro Halloween Cosplay Festival march through the streets in the Higashi-Ikebukuro district of Tokyo’s Toshima Ward on Oct. 31, 2015. (Asahi Shimbun file photo)

The sixth installment of a popular cosplay festival will be held Oct. 26-27 in the Ikebukuro district, one of the capital's hubs for "otaku" subculture.

About 20,000 cosplayers from around the world join the festival every year. The two-day event attracted a record 105,000 attendees in 2018.

The festival is centered around the station's East Exit. The area has become a hub for geek subculture, centering on “Otome Road,” which is packed with anime and manga-related shops mainly aimed at female fans.

Cosplayers roam around the streets dressed in their costumes during the festival, with a variety of events and activities concurrently held in the area.

This year’s main venue is the newly refurbished Naka-Ikebukuro Park.

For more information, visit the official website at (https://ikebukurocosplay.jp/en/).