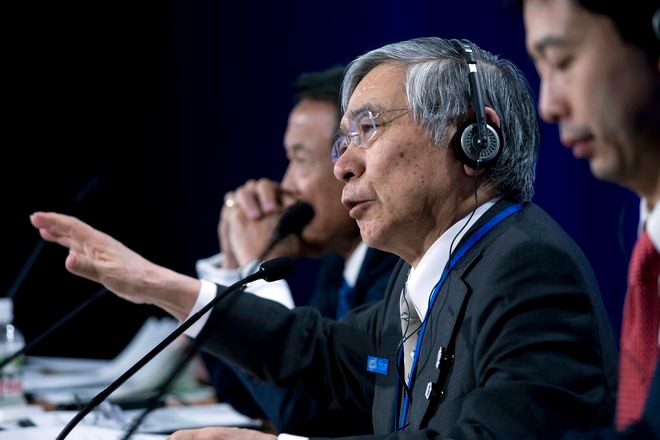 Bank of Japan Governor Haruhiko Kuroda speaks during a news conference in the sidelines of the World Bank/IMF Annual Meetings in Washington on Oct. 18. (AP Photo)

WASHINGTON-- The Bank of Japan will "certainly" reduce short- to medium-term interest rates if it needed to ease monetary policy, Governor Haruhiko Kuroda said, suggesting that deepening negative rates will be the primary tool to fight heightening overseas risks.

Kuroda also said the BOJ already has a flexible framework that allows it to accelerate purchases of exchange-traded funds (ETF) if markets become volatile, signaling its readiness to moderate stock price falls that could hurt business sentiment.

"On the whole, the world economic outlook ... has become less buoyant. And the timing of (pick-up) of world economic growth has been somewhat delayed," Kuroda told Reuters, adding that risks continue to be "fairly high."

"If we need further easing of monetary conditions, we would certainly reduce short- to medium-term interest rates. But we don't want to reduce super-long interest rates," he said on Saturday after attending the International Monetary Fund (IMF) and World Bank meetings.

The remarks underscore the BOJ's concern over the pain the bitter U.S.-China trade war and slumping global demand are inflicting on the export-reliant economy, which could prod it to ramp up monetary stimulus as early as this month.

They are also the strongest signal to date from Kuroda that if the BOJ were to ease, the most likely step would be to push its short-term rate target deeper into negative territory.

Reducing short- and medium-term rates would have a "positive" impact on the economy, while excessive cuts in super- long yields could hurt consumer sentiment by eroding investment returns for pension funds and life insurers, he said.

Under a policy dubbed yield curve control (YCC), the BOJ guides short-term rates at -0.1% and 10-year bond yields around 0% in an effort to achieve its elusive 2% inflation target. It also buys government bonds and risky assets such as ETFs.

Markets are rife with speculation the BOJ could ease at its Oct. 30-31 meeting, after it signaled last month the chance of imminent action by warning of escalating overseas risks.

When asked whether overseas risks remain high enough to warrant easing at that meeting, Kuroda said it was "a bit difficult to say definitely."

While U.S.-China trade talks have made some progress, the conflict may continue and the fate of Britain's exit from the European Union remains uncertain, he said.

Such overseas risks and cuts in the International Monetary Funds' global growth forecast would affect the BOJ's projections on Japan's economic prospects, he added.

While repeating that the BOJ won't hesitate to ease if the economy's momentum towards achieving its 2% inflation target is weakened, Kuroda said he had no pre-set idea on when to act.

"We have no predetermined policy decisions. It all depends on economic data," he said, suggesting an action this month was hardly a done deal. "We have to carefully watch, analyze global and domestic economic situations."

The BOJ has said it has four tools to ease - deepening negative rates, a cut in its long-term yield target, an increase in risky asset buying and an acceleration in money printing.

While Kuroda has said deeper negative rates is among key options, analysts have warned the move could backfire by pushing regional banks into financial trouble and hurting consumer mood.

When asked what other tools besides deeper negative rates the BOJ may opt for, Kuroda said the bank can "combine a few options" or "change some aspects" of them - without elaborating.

The BOJ pledges to buy ETFs so its holdings increase roughly 6 trillion yen ($55.34 billion) per year, but adds the pace of buying could fluctuate depending on market developments.

"Our ETF purchase is very flexible ... Even under the current asset purchase program, we can increase the ETF purchases significantly if needed," Kuroda said, suggesting the BOJ can vary the pace of buying even without changing its commitment to buy at the current rate of 6 trillion yen per year.

"As far as the BOJ is concerned, we still have tools which could be used as necessary," he said. "I don't think the effect of monetary policy has declined."