Emperor Emeritus Akihito and Empress Emerita Michiko chat at their residence in the Imperial Palace while looking at pictures of the ascension of their son, Naruhito, as new emperor. Michiko plays the piano in a concert. (Provided by the Imperial Household Agency) 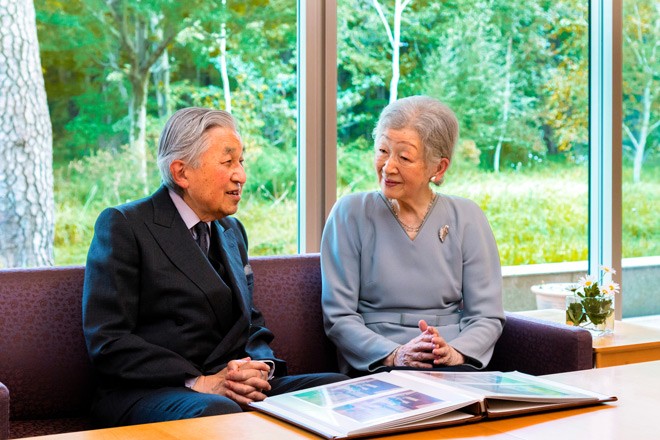 Emperor Emeritus Akihito and Empress Emerita Michiko chat over a photo album at their residence in the Imperial Palace on Oct. 16. (Provided by the Imperial Household Agency)

Empress Emerita Michiko is deeply concerned about victims of Typhoon No. 19 and described the devastation as more extensive and different from damage caused by other storms of recent memory.

Her worries were expressed in an update of her condition released by the Imperial Household Agency on Oct. 20 to coincide with her 85th birthday.

Michiko underwent breast cancer surgery in September and is receiving hormone treatment. But her thoughts were with the areas in eastern Japan that are still struggling to recover from flooding and landslides that occurred after Typhoon No. 19 made landfall on Oct. 12, the agency said.

The empress emerita treasures her time with Emperor Emeritus Akihito and always eats together with her husband, the agency said.

Her daily life now revolves around preparations to relocate to the Takanawa residence, where the couple will stay temporarily before moving into the renovated Togu Palace on the Akasaka Estate, both in Tokyo’s Minato Ward, according to the agency.

Michiko and Akihito are scheduled to move to the Takanawa residence by the end of March after the completion of New Year’s-related ceremonies.

When Michiko finds time on Sunday mornings, she usually strolls around the Ninomaru Garden of the East Gardens and the Honmaru main compound at the Imperial Palace.

Michiko is happy to see Emperor Naruhito and Empress Masako performing their new duties without a hitch following Naruhito’s ascension to the throne on May 1. The empress emerita hopes that ceremonies related to his enthronement on Oct. 22 will go smoothly, the agency added.