Killing of bear in Sapporo draws objections from outsiders 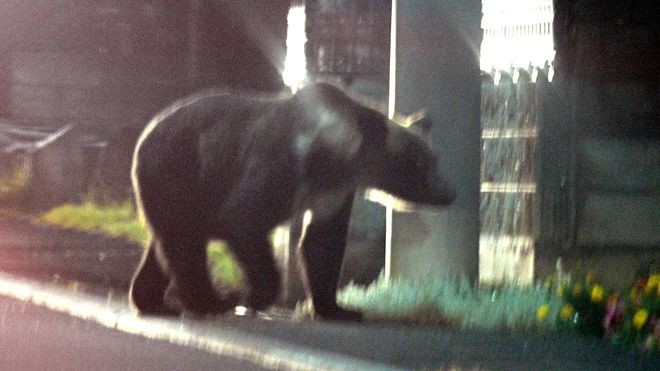 A brown bear roams through a residential area in Sapporo’s Minami Ward on Aug. 12. (Nobuhiro Shirai)

SAPPORO--Most residents here breathed a sigh of relief after the city sanctioned the killing of a brown bear that had been spotted repeatedly in a residential area here in August.

However, the killing drew many negative responses from those who opposed the decision. In particular, many objections came from outside the country’s northernmost main island.

City officials defend their decision, saying they had no choice but to kill the wild animal. The officials received more than 600 telephone calls and e-mails.

“It would’ve been better if it had been put to sleep with a tranquilizer gun and taken back to the mountains,” another said, while yet another argued: “Take it to a zoo or a bear sanctuary at least.”

Of the 60 percent who opposed the killing, most came from outside Hokkaido.

When a bear is spotted in an urban area, the city government takes measures in accordance with the four degrees of "harmfulness" based on its “brown bear basic plan.”

The killed bear fed on corn in fields and repeatedly appeared in residential areas even after it was driven off, as it apparently felt less threatened by humans and cars.

City officials felt it was a situation that posed the second highest degree of harmfulness that required the bear to be put down because it was feared that it could inflict economic damage and cause other harm.

“We had no choice because it could have harmed people,” said Yoshinori Kanetsuna, chief of the environmental symbiosis section at the city government.

“There are no other options if things escalate to that degree,” said Toshio Tsubota, a professor at Hokkaido University’s graduate school who is well-versed in brown bear behavior. “We should assume it was good to get rid of it before accidents happened.”

Was it possible for the officials to shoot the bear with a tranquilizer gun and take it somewhere else?

“When bears are shot with a tranquilizer gun, they break into a run and remain agitated for the next five to 10 minutes. It shouldn’t be done in residential areas where there are people around,” Tsubota said.

Then, how about shooting the bear after it leaves a residential area?

“It’s possible if the bear can be ushered back to the mountains, but bears that are not afraid of humans would return to urban areas rich with food,” the professor added. “There is no point in using tranquilizer guns.”

There is also a problem as to where the animal should be released.

Officials are required to gain consent from land owners to release wild animals.

“In Japan today it is virtually impossible to gain such approval,” said Tsutomu Mano, head of the Nature Conservation Division of the Hokkaido Research Organization's Institute of Environment Sciences.

As to whether bears can be accepted by zoos, an official at the city-run Sapporo Maruyama Zoo, which keeps two brown bears, said: “Brown bears are solitary, and they end up fighting each other when they are brought together. We can’t (accept more bears) now because we don’t have enough space.”

A representative of the Noboribetsu Bear Park, which keeps 72 bears, added: “If we were to keep them in groups, they need to settle into the environment from an early age, and it’s impossible when they grow older than one year.”

After all, it seems that no measures are available to save bears that have become unafraid of humans. The only way to avoid the killing of bears is to prevent them from getting used to humans in the first place.

The Fujino district of Sapporo’s Minami Ward where the killed bear had been roaming is adjacent to mountain forests. It had thrived as a fruit farming area before residential development was conducted from the 1960s through the 1970s. An increasing number of farmers have given up farming amid the declining population in recent years.

“Back then, mountain foothills had prevented bears from growing accustomed to humans,” Mano said.

People used to mow grass around fruit farms and fields and groomed forests to collect firewood, maintaining visibility into mountain foothills, which made it difficult for bears to approach populated areas. And even if they did, it was difficult for the animal to intrude into populated settlements before being spotted by residents.

“Our way of living itself had the effect of keeping animals away,” he added.

Then, what can be done to prevent wildlife from intruding on urban areas when the human population is in decline?

The Anchorage Daily News reported earlier this year that the city assembly of Anchorage in the U.S. state of Alaska passed a new law requiring residents to prevent trash bins from being scavenged through in areas inhabited by bears.

In late August, eight second-year students at the city-run Sapporo Moiwa Senior High School in Minami Ward removed undergrowth in a mountain forest in the Fujino district as part of their school's “integrated studies.” The goal was to improve visibility and make it difficult for brown bears to trespass in residential areas.

“I think if we steadily continue this kind of activity, it would help curb unnecessary killings,” one of the students said.

Mano stressed, “I want everyone to consider the issue as their own problem, not just being content with raising voices against the killing.”

(This article was compiled from reports by Kenji Katayama and Aya Amano.)