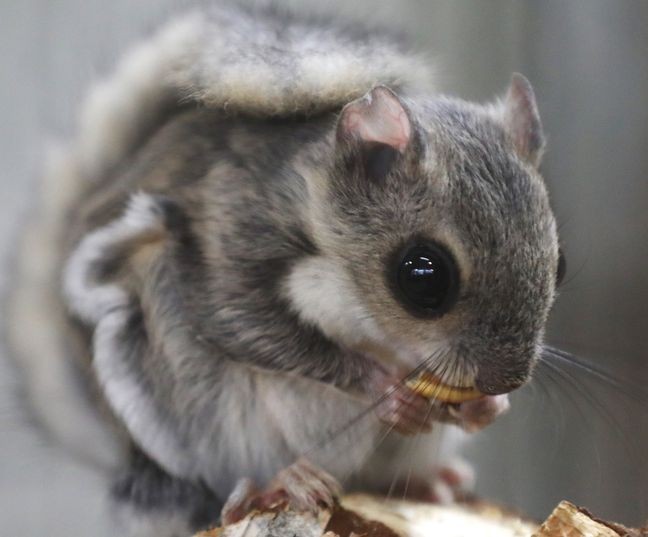 They're not called the “ninja of the forest” for nothing.

When night falls, the Siberian flying squirrel glides through the air from tree to tree in the forests of Hokkaido.

But when the slightly plump rodent fixes you with its beady stare, it actually melts your heart.

On the morning of a fall day in late September, the exhibition area seemed utterly silent. On a closer look, there were holes several centimeters in diameter on trees and nest boxes.

But minutes after a bowl with the video camera installed in the center of it was set, three Siberian flying squirrels gathered around it. They curled their tails and holding food with their small forelimbs, they munched on their breakfast.

Zoo visitors erupted into cheers at the sight, saying it was “cute” and “heartwarming.”

According to zoo attendant Natsuo Osawa, 34, the Siberian flying squirrel is a subspecies of the squirrel.

They shoot through the air from the tops of high trees by spreading their flying membrane that stretches between the fore and hind legs.

Siberian flying squirrels are active during the night to keep them safe from predators such as crows and raptors. They hide out in holes excavated by the great spotted woodpecker and other creatures.

On rare occasions, wild Siberian flying squirrels can be seen in forests in Sapporo.

“It's best to come here in the morning or evening to see them because they don’t come out of their nests most of the time during the day,” Osawa said.