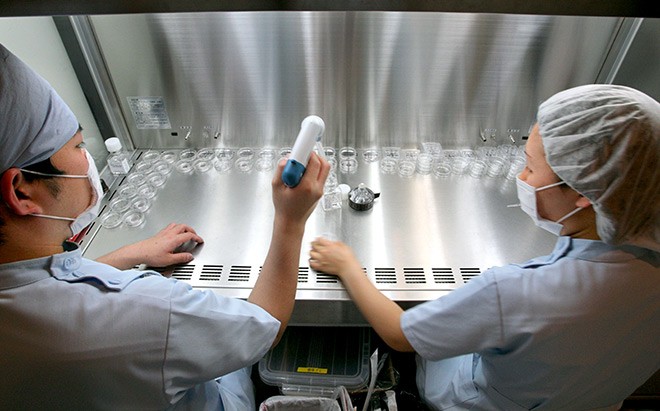 At least four medical facilities nationwide have given assisted reproductive treatments to same-sex couples such as artificial insemination, a research team at Okayama University has found.

Providing these treatments to couples of sexual minorities is not covered by guidelines of related medical societies.

Mikiya Nakatsuka, a professor at Okayama University and a gynecologist, said he believes that the finding is “only the tip of the iceberg” because the research covered only hospitals and clinics registered with the Japan Society of Obstetrics and Gynecology.

Nakatsuka, who led the study, said many sexual minorities seeking to give birth may be turning to unsafe sperm banks because the registered facilities have not foreseen the needs of same-sex couples.

For sexual minorities such as lesbians and gays to give birth, they need to go through assisted reproductive procedures such as artificial insemination using sperm from a third party and freezing eggs and sperm before receiving gender reassignment surgery.

But the Japan Society of Obstetrics and Gynecology has taken a stance that artificial insemination using a third party’s sperm is only applicable to “legally married couples.”

Guidelines of the Japan Society for Reproductive Medicine also say such artificial insemination can be applied to a patient whose reproductive function may be impaired due to cancer treatment or similar therapies.

Neither has considered a case involving a same-sex couple.

Nakatsuka's team contacted 1,131 hospitals and clinics registered with the Japan Society of Obstetrics and Gynecology for a nationwide study and received a response from 492 facilities.

Two facilities said they had provided artificial insemination to women in same-sex relationships.

Three facilities said they have frozen and kept the sperm of those who had undergone gender reassignment surgery. Both procedures were conducted at one facility.

The research team did not confirm if these recipients have actually become pregnant and given birth.

Researchers are concerned that inappropriate reproductive medicine may have spread behind closed doors.

“Medical associations and societies in Europe and the United States have issued a statement that says assisted reproductive treatment should not exclude sexual minorities," Nakatsuka said. "Discussions should be moved along in Japan, too."