Lisa’s In and Around Tokyo: Shibamata--Take a stroll into days gone by with beloved Torasan 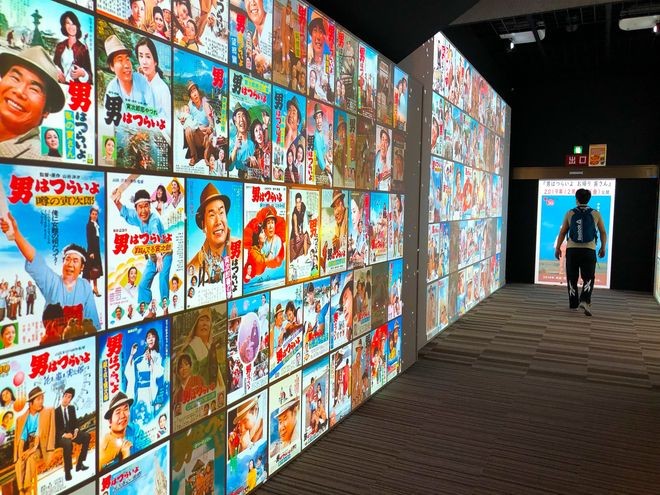 Movie posters of “Otoko wa tsurai yo” (It’s tough being a man) are displayed inside the Torasan Museum. Torasan, played by actor Kiyoshi Atsumi, was featured in a series of 48 films from 1969 to 1995. (Photo by Lisa Vogt)

“I was born and raised in Shibamata, Katsushika. I was immersed as a baby in the warm spring waters of Taishakuten Temple. My last name is Kuruma, and first is Torajiro. I am known as Tora the Drifter.” Music, start!

I always have to control the urge to clap after hearing these lines at the beginning of every “It’s tough being a man” movie.

Taishakuten, originally a Hindu god, defends deities and humans against evil. He lives in Kikenjo, the castle of goodness views, located atop the Buddhist universe. Taishakuten is often depicted giving the infant Buddha his first bath.

Torasan is in no way as fierce and competent as Taishakuten, nor is he a Buddha. Perhaps in a yin-yang kind of way, the spring waters he was baptized in have something to do with the good-hearted soul he possesses. Torasan always puts the happiness of the object of his desire--the Madonna in each episode--before himself. In this respect, he is a castle of goodness.

From Shibamata Station it’s a pleasant stroll through a quaint, yesteryear shopping street leading to Taishakuten temple. There’s an entertaining karakuri "omikuji" paper fortune machine there. Upon inserting 100 yen, a robotic "shishimai" lion dances and then selects an omikuji for you. It will put your fortune between its teeth and drop it into a hole where you retrieve it.

Then walk from the station toward the river. The name Shibamata originally was written with the characters “island” and “branch” because the Edogawa river branched out and looked like an island). The Torasan Museum is located alongside it.

Each story starts with Torasan with his beat-up brown suitcase “unexpectedly” returning home from his travels to Kurumaya, the family’s sweet dumpling shop in Shibamata. At the museum, you can see the original shop set and a cornucopia of props, posters, mock-ups and film clips of damsels in distress who Torasan inevitably falls in love with. Strategically placed life-sized cutouts of Torasan make for many cool photo ops.

Veteran director Yoji Yamada has made countless films, not just the Torasan series. My favorite is “The Yellow Handkerchief.” A museum dedicated to the director is next door, and a few minutes away is Yamamoto-tei, a grand Taisho-era home with a peaceful garden.

Search online, and you’ll find DVDs of Torasan’s misadventures with English subtitles. Might it not be interesting to study English with Japan’s most kindhearted and beloved loser?

This article by Lisa Vogt, a Washington-born and Tokyo-based photographer, originally appeared in the Sept. 22 issue of Asahi Weekly. It is part of the series "Lisa’s In and Around Tokyo," which depicts the capital and its surroundings through the perspective of the author, a professor at Meiji University.