TEPCO to pour 220 billion yen into Tokai No. 2 nuclear plant 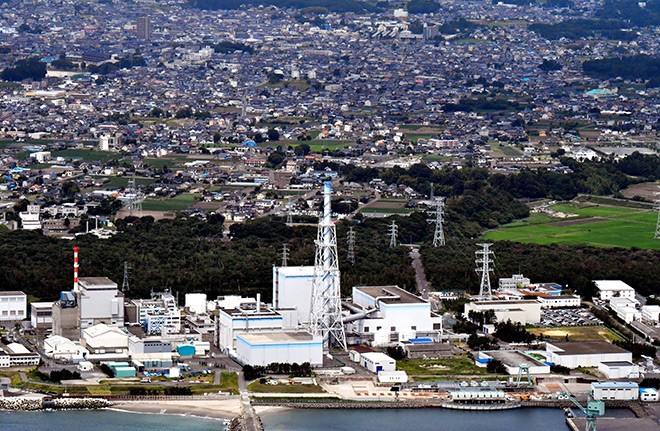 Tokyo Electric Power Co. Holdings Inc. decided on Oct. 28 to provide financial support to the aging Tokai No. 2 nuclear plant, which has been offline since the 2011 earthquake and tsunami disaster and faces an uncertain future.

TEPCO'S board agreed on the assistance estimated at more than 220 billion yen ($2 billion).

Japan Atomic Power Co., which owns the nuclear plant in Ibaraki Prefecture, will accelerate the construction of anti-tsunami embankments around the plant and other safeguards to full speed.

But local municipalities have opposed the resumption of operations at the Tokai No. 2 plant, where safety upgrades are needed, and an agreement to gain their consent is nowhere in sight.

TEPCO faces the serious risk of failing to recoup its enormous investment in the Tokai No. 2 plant.

“We have reached a conclusion that we can expect the Tokai No. 2 nuclear plant to be a source of power that helps provide inexpensive and stable electricity that emits less carbon dioxide to customers,” Rikuo Ohtsuki, a managing executive officer at TEPCO, said at a news conference on first-half financial results.

Ohtsuki, however, declined to offer specifics such as the amount of financial assistance and the purchase price of electricity from Japan Atomic Power.

TEPCO has been virtually nationalized with an injection of taxpayer money since the 2011 disaster at its Fukushima No. 1 nuclear power plant.

For such an entity to spend a vast sum to assist another nuclear plant operator has elicited criticism from the public and experts, who have urged TEPCO to be accountable and justify the decision.

A framework of financial assistance is already in place for the Tokai No. 2 nuclear plant, in which TEPCO and Tohoku Electric Power Co., two recipients of power from the plant, have agreed to pay part of a total of 350 billion yen for construction of safety measures.

TEPCO is expected to bear about 60 percent of the cost, or 220 billion yen, in a manner to pay in advance for electricity from the Tokai No. 2 plant when it goes back online, sources said.

The Tokai No. 2 plant is the only existing nuclear plant in the Tokyo metropolitan area.

Japan Atomic Power hopes to complete the construction of safety measures that is necessary for the plant to resume operations by the end of March 2021.

“We have made the judgment based on economic rationality,” Masashi Nagasawa, a TEPCO managing executive officer, emphasized at the news conference.

However, Nagasawa refused to reveal the price range for electricity that TEPCO will pay from the Tokai No. 2 plant, citing increasing sales competition following the liberalization of the electricity market.

But concerns have been raised over a potentially bad investment being made by TEPCO.

According to the analysis, the selling price of electric power per kilowatt hour before the 2011 Great East Japan Earthquake was 11.74 yen on average from fiscal 2005 to fiscal 2010.

“The annual net profit for the Japan Atomic Power at the time was about 1.5 billion yen. There was no room for a price discount,” Hajime Matsukubo, a secretary-general of the organization, pointed out.

Japan Atomic Power has formally acknowledged the costs of the construction of safety measures at the Tokai No. 2 plant and anti-terrorism facility will total 235 billion yen.

To recoup such an investment outlay, the selling price of electric power per kilowatt hour will need to be raised to about 14.5 yen, according to an estimate by CNIC.

“The price would be much higher than the market rate, which will increase the burden on consumers,” Matsukubo said.

Japan Atomic Power is a pioneer in nuclear power, starting with the operation of the Tokai nuclear plant in Ibaraki Prefecture in 1966, the nation’s first commercial reactor.

Nine regional utilities, which produce nuclear power, like TEPCO, and the Electric Power Development Co. have contributed about 90 percent of the capital.

Together they have promoted technical cooperation, symbolizing the nation’s nuclear power industry.

TEPCO is the largest shareholder of Japan Atomic Power, controlling about 28 percent.

But Japan Atomic Power faces a tough management environment. It owns four nuclear reactors—Tokai, Tokai No. 2, Tsuruga No. 1 and Tsuruga No. 2.

Of these, Tokai and Tsuruga No. 1 are being decommissioned.

Tsuruga No. 2 in Fukui Prefecture has suspended operations since the Fukushima nuclear disaster, and it has been suspected that an active fault runs directly under its nuclear reactor building.

If the company fails to resume operations of Tokai No. 2, bankruptcy is likely.

Most of the assets of Japan Atomic Power are nuclear-related facilities. If the company quits the nuclear power business, these assets will lose their value. The power companies will also likely suffer a loss and experience a business slump.

These companies are also concerned that such a scenario will affect other nuclear reactors waiting for operations to resume.

So far, every reactor has resumed operations after meeting the new regulatory standards.

If Tokai No. 2 becomes the first reactor that fails to resume operations, it will have a great impact on TEPCO, which is aiming to resume operation of its own Kashiwazaki-Kariwa nuclear plant in Niigata Prefecture to rebuild its business.

Even if the Tokai No. 2 plant successfully resumes operations thanks to such off-the-cuff financial support, its costs will swell over the long term and consumers will be burdened with paying higher electricity rates.

Many have urged TEPCO to use the financial leeway it is investing in the Tokai No. 2 plant to compensate victims of the Fukushima No. 1 plant disaster and lower electricity rates.

(This article was written by Rintaro Sakurai, Hiroki Ito and Toshio Kawada.)