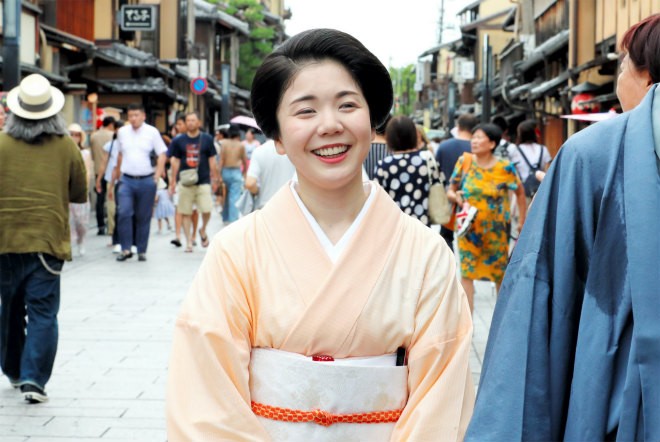 KYOTO—Tsuruha’s journey started in Okinawa Prefecture with what her mother thought was a joke.

After several hardships, extensive training and an ocean of tears, that journey has now ended. Tsuruha, a 28-year-old geisha, retired from the quintessential Japanese entertainment profession this summer.

She followed the unwritten rule that a geisha must leave the entertainment world when she decides to enter matrimony.

On July 25, she wrapped up her career as a geisha of Gion Kobu, the largest “hanamachi” (geisha quarter) in Kyoto.

When a geisha is honorably retired, she is expected to conduct a ritual called “hiki-iwai” and hand out triangle-shaped washi paper to related parties as a token of appreciation. Her geisha stage name along with her real name are written on the paper.

Tsuruha performed the ritual on Aug. 20 at about 30 teahouses and other places. It was her last task as a geisha, a profession she had taken in since she was 15.

“Madam, thank you so much for taking such good care of me for a long time,” Tsuruha said with a bow at each teahouse she had become familiar with.

She gave a washi paper with her real name, Ayana Katsuren, at each place.

The popular geisha from Japan’s southernmost island prefecture, a rarity in Kyoto’s historic Gion district, was showered with words of appreciation and support.

“I will miss you,” one person said to her. “Please come to see us again,” another said.

Tsuruha also visited the Yasaka Nyokoba School (Gion Girls’ Art School) where she visited countless times for lessons on dancing and other skills.

Inoue Yachiyo V, the 62-year-old head of traditional Kyoto dance of the Inoue school who is a living national treasure, also had some kind words for Tsuruha: “I hope things are going well for you.”

Several steps behind, a young woman followed Tsuruha and watched her every move. She was Sakurako, Tsuruha’s 24-year-old sister.

Sakurako works as a nurse at a hospital in Kyoto. It was her day off, so she came to witness her sister’s last work as a geisha on behalf of the family.

Following her big sister’s lead, Sakurako moved to Kyoto to attend a university, and they have since lived together.

Sakurako has witnessed how hard Tsuruha worked at her profession and her eagerness to take on challenges.

“She has chased her dream since she was a junior high school student,” Sakurako said after seeing Tsuruha’s last day as a geisha. “I’m sure there were many difficulties.”

Sakurako grew misty-eyed when talking about her sister.

“She has been my idol,” Sakurako said.

“I THOUGHT IT WAS A JOKE”

Ayana Katsuren was born in Naha, the capital of Okinawa Prefecture.

“Mama, I want to be a maiko,” she told her mother after seeing an apprentice at an exhibition for Kyoto Prefecture products held in the neighborhood.

Ayana was then a second-year junior high school student.

“I thought it was a joke,” Kumiko, the mother, recalled.

Ayana grew up taking lessons for Japanese dance and the “sanshin,” an Okinawan traditional three-stringed instrument. She loved singing and dancing.

Kumiko, however, believed that Ayana’s dream was to be a hair stylist because “that’s what she had always said.”

Ayana’s parents were divorced when she was an elementary school pupil.

The single mother worked at a call center during the day and took a part-time job at a snack bar at night to support her own mother, Ayana and Sakurako.

Kumiko gradually realized that Ayana was serious about becoming a geisha.

The family did not have a computer at home, so Ayana used a school computer to do research on Gion and the hanamachi entertainment world.

Every night when Kumiko came home from work, she found A-4 sized pieces of paper on the family’s dining table containing Ayana’s research on maiko and hanamachi. The reports were always accompanied by a note that said, “Mama, please read.”

“If she is that serious, I should be serious, too,” Kumiko recalled thinking when she started to hunt for connections to the geisha world.

But she couldn’t think of anybody who had been to Gion.

At the snack bar where she worked, Kumiko asked every customer from the mainland: “Is there anybody who knows somebody in Gion? My daughter wants to be a geisha.”

She always carried Ayana’s resume and picture, ready to hand them to a possible connection.

After asking about 100 people, the mother finally found somebody who knew a person with connections to a geisha house in Kyoto called Tama.

A job interview with Tama was arranged, and soon the big day arrived.

“We were so nervous. I will never forget that day,” Kumiko recalled.

Before the interview, she and Ayana met the woman who had introduced them to Tama at a cafe near Yasaka Jinja shrine, a symbol of Gion in Kyoto’s Higashiyama Ward.

The mother and daughter bowed and exchanged pleasantries with the woman whom they had never met before.

“If it doesn’t go well today, you’ll give it up, OK?” Kumiko told Ayana. “You will take the entrance exam for high school like everybody else.”

Before showing up at Tama for the interview, the mother and daughter sobbed.

Tama’s madam greeted them at the house. “I was just telling a customer that it’s almost time for the girl from Okinawa to arrive.”

At that moment, the door opened for Ayana to be part of the hanamachi world.

On the first day of Ayana’s training as a “shikomi” (apprentice of maiko), Kumiko took her daughter to Tama. The mother knew she would be flying alone on her return trip to Okinawa.

A lattice sliding door at the entrance of Tama shut. Kumiko heard the madam telling Ayana behind the closed door: “You will use the back entrance from tomorrow, not the front.”

Kumiko knew then that the little girl she had raised would now be a “stranger” named Tsuruha. The tears kept flowing from the mother’s eyes.

When growing up in Naha, Tsuruha never did household chores, such as cleaning and cooking. That made Kumiko anxious about her daughter’s ability to adapt to an unfamiliar communal living environment.

Early on, when Kumiko received phone calls from Tsuruha at night, the mother tried to sooth the young apprentice and provide some cheer when it was needed.

“Let’s give it your best shot tomorrow, OK?” Kumiko would say. “Just aim for the first week.”

After that, the mother told her daughter, “It’s almost a month.”

The day came when Tsuruha made her debut as a maiko.

Kumiko went to Kyoto to witness her daughter’s proud moment.

Tsuruha told her, “I would have probably left and returned home if Okinawa was closer.”

Kumiko cried when she thought about the extreme difficulties that her daughter had faced.

“I realized then that I hadn’t given her money, and it made my heart ache,” Kumiko recalled. “I had paid for the phone calls and sometimes sent a care package of snacks and other things. But that was everything I could do back then. I couldn’t afford to give her money to travel to Okinawa.”

Tsuruha recalled things a bit differently, talking about her hardships as if they were fun.

Within a week of her maiko debut, Tsuruha tumbled while trying to get used to walking in a pair of “okobo” lacquered wooden clogs for girls.

She suffered a cracked bone in her leg, and she was returned to apprentice status and tasked with phone duty.

On another occasion, she walked on stage in sandals, her everyday footwear. It was considered an abysmal failure for a maiko.

And one time, when Tsuruha visited her hometown in Okinawa, she missed her return flight and couldn’t go back to Kyoto on time.

The episode was captured by a TV crew that was covering Tama for a documentary that later aired on television.

Clients and visitors often reminded Tsuruha of the incident: “You’re that girl who missed a flight! You’re still here!”

Tsuruha became a geisha in 2012, charming many with her natural cheerfulness and polished skills.

When she started as an apprentice, there were more than 10 cohorts in Gion Kobu.

But everybody eventually left, except Sayaka, a fellow geisha. The two have supported and encouraged each other.

“Because of Sayaka, I could make it through,” Tsuruha said.

Sayaka was also the first person Tsuruha told about her upcoming marriage.

Tsuruha had already decided on her retirement in February, but she waited until after the annual Miyako Odori stage event held in April at Kyoto’s Minamiza Theater.

Miyako Odori is a seasonal tradition in Kyoto and a showcase of new dances performed by geisha and maiko in Gion Kobu.

It also has a special place in Tsuruha’s heart because it was the first show she saw with her mother before she became a maiko.

“I wanted to perform there for one last time,” Tsuruha said.

The show was performed at Minamiza Theater for the first time in 67 years.

At the end of the hiki-iwai retirement ritual, Tsuruha was all smiles.

“I have been happy, blessed with my madam, seniors, peers and juniors,” Tsuruha said.

Kumiko was proud of her daughter’s achievement. “I think she was very happy that she could dance on the wonderful stage at Minamiza Theater at the end. I hope she will blossom her own flowers on a different stage of life.”

Tsuruha has returned home to Okinawa to spend some quiet time with her family. Then she will start a new chapter in her life in Kyoto.