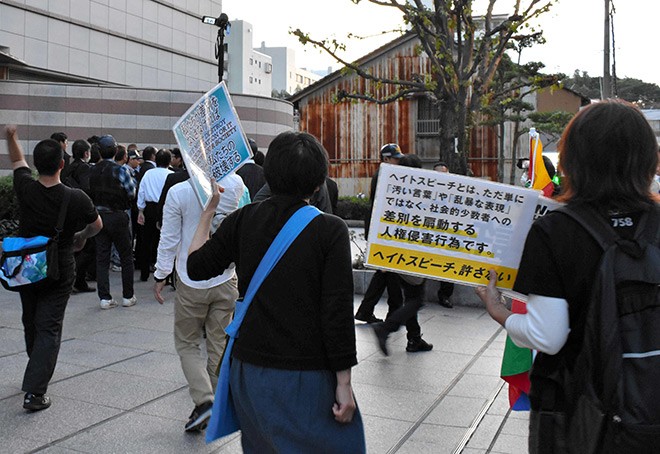 Citizens protest a gathering by an “anti-immigration” political group at Will Aichi, an Aichi prefectural facility, in Nagoya’s Higashi Ward, on Oct. 17. (Hwang Chul)

NAGOYA--Aichi Governor Hideaki Omura on Oct. 29 criticized officials for failing to halt what he described as an anti-Korean “hate speech” rally held at a prefectural facility here.

“It is abundantly clear that the event constituted hate speech, considering its content,” Omura said at a news conference, adding that the officials’ handling of the rally was “inappropriate.”

He said the prefectural government will consider possible litigation against the organizer of the rally and other measures.

The event was held under the banner of “anti-immigration” at Will Aichi, a prefectural facility in Nagoya’s Higashi Ward, on Oct. 27.

It was staged by a political organization that it says is headed by a former chairman of Zainichi Tokken wo Yurusanai Shimin no Kai (Group of citizens who do not tolerate privileges for ethnic Korean residents in Japan), which has held discriminatory demonstrations in many parts of the country.

A private anti-discrimination group had called on the prefectural government to refuse the organization’s request to use the facility, citing the high likelihood that members would stage activities to stir up bigotry.

Under prefectural guidelines for the use of public facilities, officials can reject an applicant’s request when it is feared that the would-be user will be involved in unjust and discriminatory behavior.

However, they gave the green light to the political organization after its members pledged they would not engage in hate speech at the event.

Based on alerts by visitors at the rally, officials confirmed that some “karuta,” or traditional Japanese playing cards, on display bore words fueling hatred toward Korean residents in Japan, including, “Criminals are invariably Korean.”

The guidelines also contain a clause that permits prefectural authorities to order a halt to an ongoing event involving hate speech.

The anti-discrimination group urged staff at the venue to use this clause to call off the gathering, but to no avail.

Even after staff members confirmed the anti-Korean exhibits, they allowed the event to continue.

Omura regretted the handling of the situation.

“As soon as they confirmed the content of the exhibits, they should have ordered the organizer to stop the event,” he said.

As for why the rally was given the OK in the first place, Omura said that preventing people from instigating discrimination at public facilities remains a challenge for authorities.

At a news conference on Oct. 21, the governor said that unless applicants clearly state in their applications that they will stage a hate speech gathering, it is difficult for officials to weed out such groups.