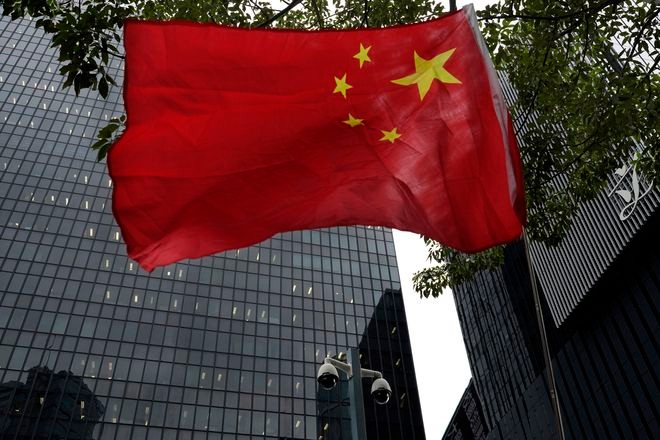 The Chinese national flag is raised by protesters outside the Government Headquarters in Hong Kong on Oct. 29. (AP Photo)

LONDON--Hong Kong bourse Chief Executive Charles Li said there are fundamental flaws in the "one country, two systems" formula that governs the former British territory as it grapples with its biggest political crisis in decades.

The comments by Li mark a rare public condemnation of the system that governs the Chinese-ruled city from a senior Hong Kong business executive.

Anti-government protesters have taken to the streets for five months, battering retail sales and the services sector, with the government expected to confirm on Thursday the city has entered its first recession in a decade.

"The great concept, the great creation of one country, two systems ... has some fundamental flaws at the very beginning of the implementation," he said.

Hong Kong was handed from British to Chinese rule in 1997 under the "one country, two systems" formula, which guarantees freedoms not granted in mainland China.

Li was speaking at an event in London late on Tuesday. The Hong Kong Exchanges and Clearing Ltd. earlier this month scrapped an unsolicited $39 billion (4.2 trillion yen) approach for the London Stock Exchange Group.

The sometimes violent protests in the Asian financial hub have rattled investors and pose one of the gravest challenges to Chinese President Xi Jinping since he came to power in Beijing in 2012.

Protests erupted over a now-scrapped extradition law that would have allowed suspects in Hong Kong to be sent to mainland China to be tried in courts controlled by the Communist Party.

The demonstrations have since evolved into calls for greater democracy among other demands, including an independent enquiry into what protesters allege is police brutality.

Li said there should have been a "grand bargain" between the people of Hong Kong and China in 1997.

The demonstrations that have rocked Hong Kong have depressed investment while the Hang Seng index of the city's largest companies has shed 8 percent since early July, underperforming a 2 percent loss in MSCI's broadest index of Asia-Pacific shares outside Japan.

The city may have lost as much as $4 billion in deposits to rival financial hub Singapore between June and August, Goldman Sachs said.

Protesters are angry at what they see as Beijing's increasing interference in Hong Kong, but Li said the protesters need to question what their end objectives were.

China denies meddling and has accused foreign governments, including the United States and Britain, of stirring up trouble.

"We always have an open society and a free economy. The only thing we didn't have is political rights," Li said.

"But if you want to use it to resolve your local problems, then the central government shouldn't have a problem," Li told the annual dinner of the London Metal Exchange, which the HKEX bought in 2012 for $2.2 billion.

Some demonstrators are increasingly focusing their anger on the more than one million mainland Chinese in Hong Kong, hurling abuse and, in some cases, beating them.

Li said Beijing has always been suspicious that the people of Hong Kong accepted its rule.

"China never really felt confident ... that people in Hong Kong were not opposed to one country," he said.