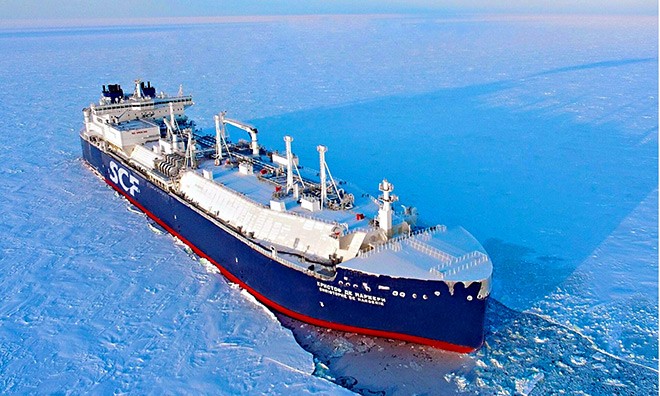 An LNG icebreaker to be used in the Arctic LNG 2 project. The ship is specially designed so that it can break through sea ice. (Provided by Novatek)

Two Japanese organizations will invest up to 400 billion yen ($3.7 billion) in a Russian liquefied natural gas (LNG) project in the Arctic Circle, which could boost Japan's energy sources and also help bilateral relations with Russia.

The project is planned around the Yamal Peninsula in the Russian Arctic Circle by major Russian LNG developer Novatek. Production is scheduled to start in 2023 and 19.8 million tons of LNG are expected to be produced annually.

The Japanese government is supporting economic cooperation with Russia, in the hopes that it will have a positive influence on bilateral negotiations to sign a peace treaty.

However, there are challenges, such as whether Mitsui and JOGMEC can make a profit from the investment and whether they can secure purchasers for the LNG.

At the Group of 20 summit held in Osaka on June 28 and 29, Prime Minister Shinzo Abe and Russian President Vladimir Putin met on the sidelines on the final day.

Their meeting coincided with the ceremonial signing of the contract for the LNG development project in the Arctic Circle, with government leaders of both countries attending.

The total development cost is estimated from 2.2 trillion yen to 2.5 trillion yen. Of the cost, 60 percent will be shouldered by Novatek. As for the remaining 40 percent, French oil and gas developer Total, two Chinese state-run companies and the Japanese group will each invest 10 percent.

In the June 29 signing ceremony, a contract to acquire a 10-percent stake was signed by the Japanese group with Mitsui President Tatsuo Yasunaga and others in attendance.

Abe said after his meeting with Putin, “I welcome the establishment of cooperation that will contribute to the development of the Arctic region promoted by Russia and a stable supply of energy to Japan.”

Mitsui and JOGMEC plan to invest 300 billion to 400 billion yen in total, including the costs to acquire the stake. Of the investment amount, 25 percent will be shouldered by Mitsui and the remaining 75 percent by JOGMEC.

Of the natural gas that has yet to be discovered in the world, 30 percent is believed to lie in the Arctic Circle.

As the layer of sea ice that covers the Arctic Ocean has decreased due to global warming, it has become possible to transport LNG and other products eastward to Asian countries in the summer.

“It is extremely significant to be able to utilize natural resources in the Arctic Circle, which has been difficult due to limitations imposed by the climate,” said Michiaki Hirose, chairman of the Japan Gas Association, who is also serving as chairman of Tokyo Gas Co.

Meanwhile, the investment in the Russian LNG development project poses risks, including profitability.

“The project will have sufficient cost-competitiveness. We have yet to secure purchasers (for the LNG). But we will aim to find the best purchasers by utilizing the advantage of being able to transport (the LNG) both to Asia and Europe,” said Taichi Nagino, head of the Russian natural gas business division of Mitsui.

To transport LNG in the Arctic Circle in the winter, however, specially designed icebreaker vessels are necessary, which will make transportation costs high.

New LNG projects are also under way in Australia and Qatar. There is also a possibility that exports of U.S. shale gas will increase. If too much LNG is put on the market, prices will decline, damaging profitability.

In addition, Japanese companies that purchase LNG buy it mainly based on long-term contracts. When the contracts expire, the sellers have to set forth conditions that are acceptable to purchasers.

Electric power companies are the biggest purchasers. However, if they can resume operations of their nuclear power plants, they will be hesitant to be locked into long-term contracts to purchase LNG.

“It is difficult to promise to buy new LNG based on long-term contracts,” said a related source.

Doing business with Russia also carries political risks. Mitsui and Mitsubishi Corp., another major Japanese trading house, had to abandon half their stakes in the Sakhalin 2 LNG project in the Russian Far East under pressure from Russia's Ministry of Natural Resources, which halted the initial project in 2006, citing environmental concerns.

Novatek is said to have close ties to Putin.

“Russia is capitalism based on personal connections," an energy industry source said. "A basis (for a business) could collapse depending on Putin’s intentions.”