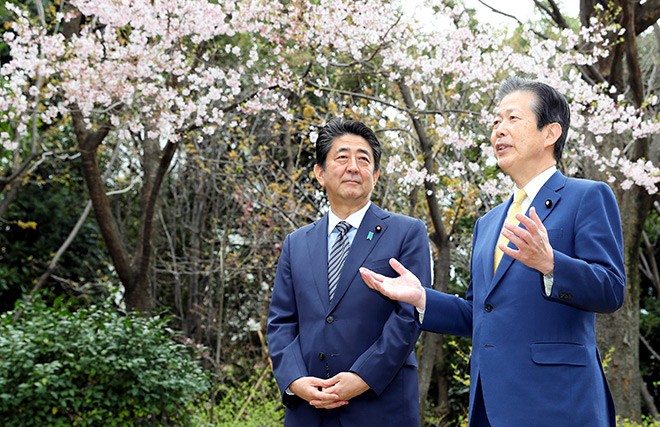 The two ruling parties have grown wide apart over constitutional revisions, an issue that Prime Minister Shinzo Abe wants to highlight for the July 21 Upper House election, a survey showed.

More than 90 percent of Liberal Democratic Party candidates for the election support the revisions. But only 17 percent of candidates of junior coalition partner Komeito back the changes, the survey showed.

The survey was jointly conducted by The Asahi Shimbun and the office of Masaki Taniguchi, a professor of political science at the University of Tokyo.

From late May, questionnaires were sent to ruling camp and opposition candidates in the election. Responses from 343 candidates were received by fax or through a special website by the evening of July 1 and analyzed.

“I want voters to choose (candidates or parties) based on a standard of whether a party is one that discusses the Constitution or one that does not even hold discussions,” Abe, who is also the LDP president, said.

Revising the postwar pacifist Constitution has long been a goal of the prime minister.

Approval is needed from two-thirds of lawmakers in both Diet chambers to pass the revisions. The revisions would then be put to a vote in a national referendum.

A big focus of the election is whether the pro-revision camp can secure two-thirds of the Upper House seats. Opposition Nippon Ishin (Japan Innovation Party) is positive toward constitutional revisions under the Abe administration.

The remaining option was “neither.”

According to the results, 45 percent of all candidates support constitutional revisions while 38 percent voiced opposition.

By party, 93 percent of the 69 LDP candidates who responded in the survey favor the revisions. The support rate among LDP candidates has exceeded 90 percent for every national election held since the second Abe Cabinet was formed in December 2012.

All 20 of the Nippon Ishin candidates who responded support the revisions.

But only 17 percent of Komeito’s 23 responding candidates support the changes, while 9 percent oppose the revisions and 74 percent chose “neither.”

At the time of the 2013 Upper House election, Komeito leader Natsuo Yamaguchi, who plans to run in the July 21 election, said in the survey, “I support the revisions if I have to choose.”

In the latest survey, however, he answered, “It is not necessary to revise the Constitution if I have to choose.”

The plunge to 17 percent among Komeito candidates can be attributed to the party’s loss of seats in the 2017 Lower House election.

Komeito analyzed the causes of the loss and concluded that the party failed to meet voters’ expectations of applying the brakes to the LDP’s power, according to a Komeito executive.

Since then, Komeito has made efforts to show its own colors.

As for opposition parties other than Nippon Ishin, 78 percent of the 40 candidates of the Constitutional Democratic Party of Japan who responded in the survey oppose the revisions, while 8 percent support the changes.

In the 2017 Lower House election, 29 percent of the party’s candidates supported the revisions.

Meanwhile, 25 percent of the 28 candidates of the Democratic Party for the People support the revisions, 32 percent were neutral, and 43 percent oppose them.

One candidate of the Reiwa Shinsengumi party opposes the revisions while its other candidate was neutral.