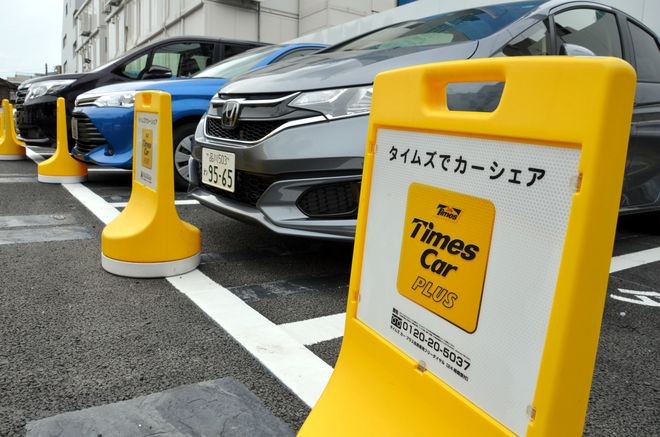 One of many parking lots for car-sharing services, available everywhere in urban areas, in Tokyo’s Minato Ward on June 14 (Takeho Morita)

The service, with 230,000 registered users, realized around summer 2018 that some people who rented vehicles never actually drove them.

Orix examined its mileage records after it was asked about the issue by a media outlet and found several percent of its rented vehicles “traveled no distance.”

“We have no clear idea how they actually used our vehicles,” said an Orix public relations official. “The only thing we can say is that data show a number of people rent cars without driving them.”

Times24 Co., the leading automobile-sharing service provider, with more than 1.2 million registered users, discovered that some utilize their cars for surprising purposes.

One respondent to the company's survey said they rented vehicles to nap in or use for a workspace. Another person stored bags and other personal belongings in the rental car when nearby coin lockers were full.

In the aftermath of the 2011 Great East Japan Earthquake and tsunami, rental cars were also used to recharge cellphones.

SPACE TO EAT, SLEEP AND THINK

"I rented a car to eat a boxed meal that I bought at a convenience store because I couldn't find anywhere else to have lunch,"said a 31-year-old male company employee who lives in Saitama Prefecture, close to Tokyo.

“Usually the only place I can take a nap while visiting my clients is a cybercafe in front of the station, but renting a car to sleep in is just a few hundred yen (several dollars), almost the same as staying in the cybercafe.”

Easy accessibility is a big advantage of car-sharing services. Customers can reserve vehicles any time 24 hours a day on their smartphones for immediate use.

It only costs around 400 yen to use one for 30 minutes that can be picked up at one of the firm's more than 12,000 parking places across Japan.

Those advantages likely lead more consumers to use rental automobiles for unusual uses.

Survey results by other firms show the number of customers who rent cars for reasons besides driving is steadily rising.

NTT Docomo Inc., which operates a vehicle-sharing service, found in a 2018 survey of 400 customers that one out of every eight users rented automobiles for purposes other than transportation.

An overwhelmingly large number of respondents said they slept or rested in vehicles, followed by customers who said they used cars as spots to talk with friends, family and business clients on the phone.

People also rented vehicles to watch TV in, get dressed up for Halloween, practice singing, rapping and English conversation, and even do facial stretches said to reduce the size of their face, NTT found.

“Cars can be used for private space,” said the NTT Docomo official in charge of the study. “People used our vehicles in more ways than we expected.”

Though most customers rent share-use vehicles for driving, the number who rent them primarily for other uses is slowly rising.

Some service providers, however, are a bit embarrassed about the ways their vehicles are being used.

Operators also lose cash when consumers rent vehicles for “non-driving purposes” since customers pay more if they log a lot of mileage.

Another problem is that some users stay in cars with the engine left running to beat the heat in summer or stay warm during winter, but that could have negative effects on the environment.

“Motorists should shut off their engines when they're not driving, and we do not recommend our customers rent vehicles for purposes other than traveling,” said an Orix public relations official. “We believe it's best for our cars to be used for driving.”