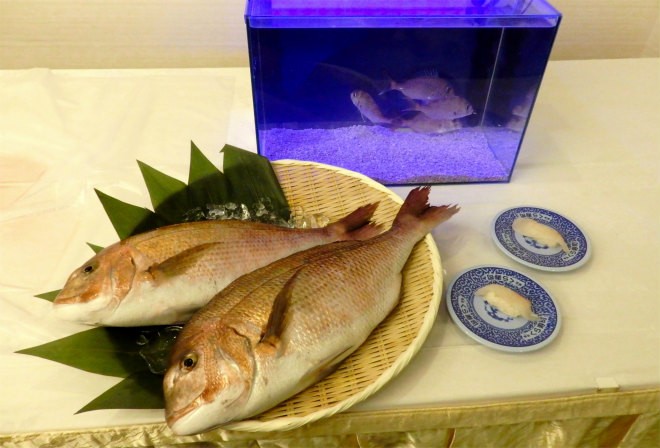 Kura Sushi will raise young red sea bream caught in fixed nets like those seen in the tank in the background to adulthood and use it in sushi at its restaurants. (Hiroki Hashimoto)

In June, the Osaka Prefecture-based firm started farming red sea bream on its own in Anan, Tokushima Prefecture, and will begin farming "hamachi," or amberjack, from July.

Kura Sushi plans to raise the immature fish weighing less than 300 grams until they weigh more than 1 kilogram, which will take between a year and a year and a half. The grown fish will be used for sushi items as early as 2021 at Kura Sushi restaurants.

The company has had contracts with a part of fishery cooperatives since 2015 to buy entire catches of ships that use fixed fishing nets.

Many young fish that aren’t suitable for sushi use are caught in stationary net fishing and are ground up to make croquettes and other foods.

One year, an estimated 10 tons of immature amberjack and 1 ton of immature red sea bream were caught, according to Kura Sushi.

The volume of fish catches in Japan continues to plummet. According to an annual report compiled by the Fisheries Agency, domestic production in the fishery and aquaculture industry peaked at 12.8 million tons in 1984. In 2017, it was a third of that at 4.3 million tons.

In contrast, international demand for fishery products has shot up. Prices for popular fish for sushi have tended to climb.

“I haven’t seen detailed images of the items yet," said Kura Sushi's managing director, Hiroyuki Hisamune. "But I want to provide those grown fish along with products customers have already eaten up till now. I also hope to maintain the current price range.”

Hisamune said he wants to increase the number of fish Kura Sushi farms and will expand the types of fish it raises depending on how the project progresses.