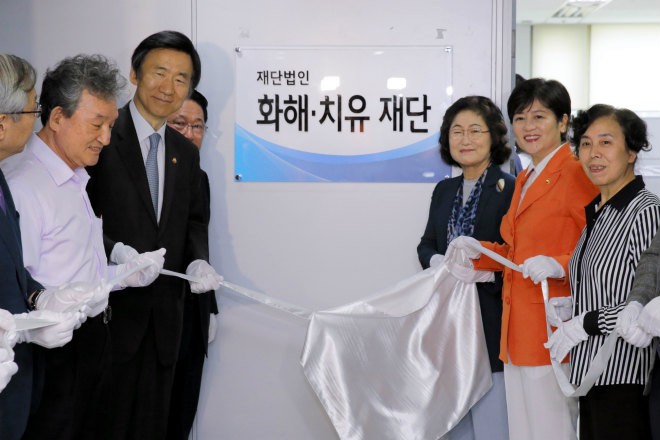 The unveiling ceremony of the Reconciliation and Healing Foundation, which operated a Japanese fund to support former comfort women, is held in Seoul on July 28, 2016. (Provided by The Dong-A Ilbo)

SEOUL--South Korea has shut down a foundation that was conducting an assistance program for former “comfort women” or their bereaved families based on a 2015 agreement between Japan and South Korea.

As of the evening of July 4, the South Korean government had yet to inform the Japanese government of its dissolution of the Reconciliation and Healing Foundation.

South Korea's action will likely provoke a strong backlash from the Japanese government since Japan did not give its consent to shutter the foundation.

Comfort women were forced to provide sex for Japanese soldiers before and during World War II when the Korean Peninsula was under Japan’s colonial rule.

According to sources related to the foundation, South Korea applied to register the foundation's disbandment on June 17. On July 3, the foundation received a notice saying that the registration procedures were complete.

In November 2018, the South Korean administration headed by President Moon Jae-in announced it would dissolve the foundation. It then began procedures to close it down without obtaining consent from the Japanese government.

The foundation was engaged in a program that offered 100 million won (about 9 million yen, or $83,450) to each former comfort woman or 20 million won to her bereaved family, taken out of a 1 billion yen fund provided by Japan.

“We don’t know whether the money will be paid to them in the future,” said a source connected to the foundation.