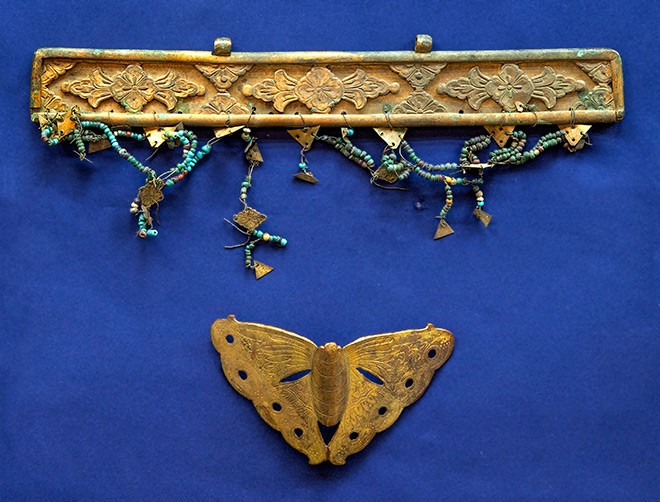 KYOTO—Centuries-old metallic decorations for a portable shrine were discovered at a famed shrine here, raising hopes for a revival of an ancient festival that was halted because of war.

The decorations, found at Kitano Tenmangu shrine in Kyoto’s Kamigyo Ward, are believed to have been made between the late 12th century and early 14th century, making them among the oldest known in Japan.

Three copper decorations, each 5 centimeters by 35 cm, feature elaborate engravings, while several 9 cm by 15 cm ornaments were formed in the shape of butterflies. They were all used on a “mikoshi” portable shrine that had been carried during the Kitano Matsuri festival.

The shrine on July 4 announced that the ornaments were discovered in its storehouse during a study in December.

Tomoyasu Kubo, a curator emeritus at the Kyoto National Museum who was involved in the study, said the decorations were likely created in the Kamakura Period (1185-1333), citing the engraved Hosoge pattern of foliage, which purportedly came from China.

The discovery comes at a time when the shrine is striving to resurrect its Kitano Matsuri, an ancient festival held there by imperial order, in 2027.

Kitano Tenmangu had held the festival since the Heian Period (794-1185).

But it was forced to end the event when Kyoto became engulfed in the 10-year Onin War between two feudal lords from 1467.

Shrine officials believe the ornaments as well as shrine archives and other sources will provide clues in their efforts to recreate the lost ancient portable shrine for the festival.

The ornaments are on public display at the shrine’s treasury through Aug. 25.