Lisa’s In and Around Tokyo: Kannonzaki--Plenty of history lies along Miura’s peaceful shores 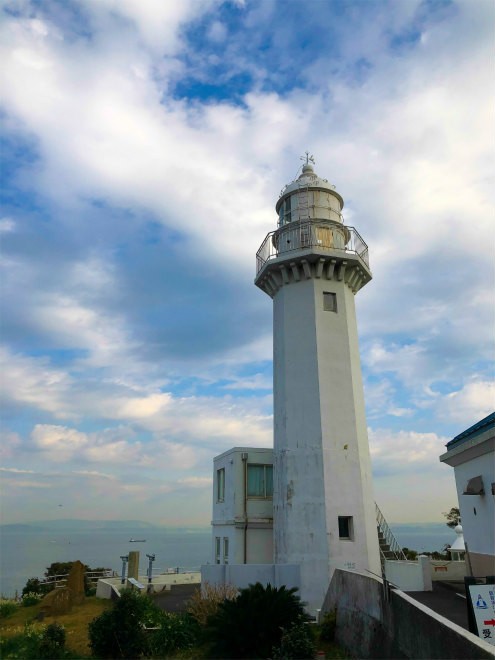 Kannonzaki Lighthouse, located on the shores of the Miura Peninsula, is known as the first Western-style lighthouse in Japan. Visitors can enjoy a leisurely stroll along the pedestrian path to the lighthouse. (Photo by Lisa Vogt)

My all-time favorite deity is the Buddhist bodhisattva Guan Yim, also known as the Goddess of Mercy.

In Japanese, Kannon-sama. I have always used Canon cameras because of this. The connection? Cameras that we know today as “Canon” in 1933 were originally named Kwanon Camera in honor of the goddess, and they had a cool logo on them with the deity and her multiple outstretched arms.

So, when I heard about Kannonzaki on the easternmost part of Miura Peninsula, I knew I had to visit.

It turns out that there’s little trace of the goddess on the cape today. In 741, an 11-headed Funamori Kannon, the protector of boats, was enshrined in a sea cave, and in the Edo Period (1603-1867) a Kannon-doh temple was erected. But in 1880 the structure was moved, and aside from a small marker today, only the name Kannonzaki remains.

Due to its strategic location at the entrance of Edo Bay, in 1812 a guard station to watch for ships and a cannon battery (not Canon battery--haha, sorry, I couldn’t resist) were built to keep out unwelcome elements.

Because Kannonzaki was used as a citadel by Japan’s former Imperial Army, you can see old military structures such as brick-made magazine bunkers and tunnels as you walk around the cape.

Japan’s first Western-style lighthouse was built here. It was designed by Francois Leonce Verny (1837-1908), a Frenchman hired as a foreign adviser to the Meiji government. Unfortunately, earthquakes damaged the first two, and the current lighthouse is its third incarnation and was completed in 1925.

They say that Godzilla, the monster that emerged out of the atomic holocaust as seen in the original 1954 movie, came out of the sea at Kannonzaki Park. You can see exactly where Godzilla took his first step ashore as it has been kept intact. If you’re a Godzilla fan, you probably know this already, and have made your pilgrimage to this holy site, right?

In “Gulliver’s Travels,” a book about his remarkable journeys from 1699 to 1715, the only real location visited by the narrator of the book, Lemuel Gulliver, was Japan, i.e., every other place was fictitious. In the book, there’s a passage where he asks the emperor of Japan to excuse him from having to step on a crucifix. And, where did Lemuel land? Why Kannonzaki, of course.

With its fascinating history, barbecue-friendly beaches, intriguing hiking trails and the unseen-but-felt Kannon presence, the cape awaits you this summer.

This article by Lisa Vogt, a Washington-born and Tokyo-based photographer, originally appeared in the June 9 issue of Asahi Weekly. It is part of the series "Lisa’s In and Around Tokyo," which depicts the capital and its surroundings through the perspective of the author, a professor at Meiji University.